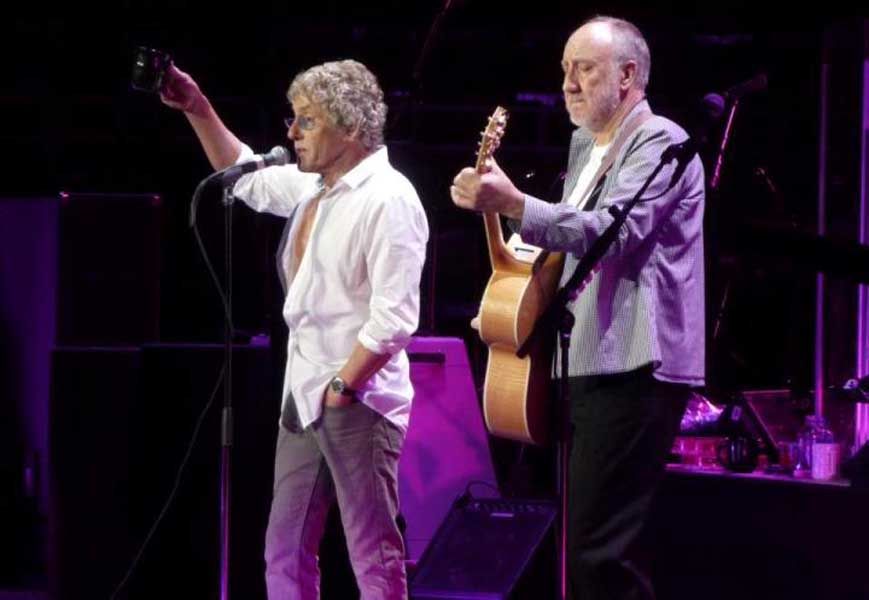 What do you get when you take two men, both nearing seventy years of age, an arena full of spectators whose median age was probably fifty, and one of the most ambitious albums to ever come out of the 1970’s? The answer was a gamble that, in a sense, was worth so much more than any amount of money patrons had plunked down at the local casinos before the show.

The answer was: The Who’s Quadrophenia and More tour. Surviving members of the legendary rock band, Pete Townshend and Roger Daltrey, along with a fantastic ensemble of backup musicians, dropped by the Joe on Saturday night to trod out their “other” rock opera. And blow all our minds in the process.

Quadrophenia tells the story of a young man named Jimmy, and his struggles growing up and finding a place in the 1960’s, English, ‘mods-vs.-rockers’ society. Originally released as a double album in 1973, hearing it now was nothing short of a treat.

A video opener with the short ‘I Am the Sea’ interlude showed footage of The Who in their early days, but when it came time for the bombastic ‘The Real Me,’ we finally had ourselves a show. Lead vocalist Daltrey started off incredibly strong, tearing through the song with ease. For his part, Pete Townshend was already rocking hard, wind-milling as only he can. The piece’s overture, ‘Quadrophenia,’ had Simon Townshend--Pete’s younger brother--shredding his guitar part. Daltrey was armed with two tambourines, and Pete donned a pair of sunglasses, looking like the coolest old dude you could ever meet.

And let’s face it, he probably is.

‘Cut My Hair’ was our first taste of Pete Townshend’s turn on vocals. His voice had a certain gruffness to it, but he sounded as good as ever. The irony in the track’s title wasn’t lost--on me, at least--as a visibly grey Townshend sang the ode to teenage angst. ‘The Punk and the Godfather’ came next, with Daltrey flawlessly swinging his microphone like it was a giant lasso. I was pleased to see my favorite track on the album be accompanied by such a spectacle.

The next two tracks belonged to the Townshend brothers, as Pete masterfully delivered ‘I’m One’ and Simon stepped up in a big way, taking lead vocals on ‘The Dirty Jobs.’ The only disappointment there was that his bus driver’s cap was missing. Here’s hoping it shows up at some point. Simon’s contributions to the show became all the more meaningful as it progressed; he perfectly filled in the empty vocal spaces occasionally left by Daltrey. And I, for one, am grateful for it.

The crowd immediately leapt to its feet for ‘5.15,’ which featured an absolutely stunning run by the brass section. The coolest part about this song, though, was a special cameo by the late, great, John Entwistle performing a phenomenal bass solo, that had us all going out of our brains. The magic of video is a powerful thing, and that was only the beginning. ‘Bell Boy’ had footage of legend Keith Moon dropped in, allowing him to take lead vocals for a portion, while the live band simply played along. The ovation Moon received was undoubtedly a mix of adrenaline and emotion from a profoundly moved crowd.

May both of them rest in peace.

‘Dr. Jimmy’ saw Pete working both his guitar and the crowd like a man half his age, with a contagious energy. Roger Daltrey, for his part, was still going strong. I have to admit, he surpassed my expectations. I figure it’s all about knowing one’s physical boundaries, which explained some of the lower keys, but Roger definitely played to the heights of his limits. Even as our singer left the stage for a well-deserved break, the band gave us ‘The Rock,’ an instrumental piece with a video backdrop that showcased many highlights and lowlights of the 1960’s through the present: Everything from Vietnam to Richard Nixon, to John Lennon, Princess Diana, September 11th, and more.

The album’s climax--and final song--‘Love, Reign O’er Me’ was a valiant effort by Daltrey, who, again, performed as well as his limits allowed him to. I’d give it a solid 95 out of 100. And by this point, the man’s white shirt was completely unbuttoned, revealing what I’ve affectionately begun calling ‘grandpa abs.’ Roger Daltrey unknowingly shamed dozens of patrons in that moment, I’m sure, into hitting the gym this weekend with his impossibly fit body.

How do you think he does it? I don’t know. Just sayin’.

As the final chords faded, surely the band could feel all of our love and good vibes raining down on them. At least that’s my hope.

When at last we quieted down, Pete Townshend introduced the band which included Loren Gold on keyboard, Zak Starkey (Ringo’s son) on drums, Pino Palladino playing bass, and Reggie Grisham and JG Miller filling out the brass section. He then went on to talk about Michigan’s undying devotion to The Who, including speaking fondly of one of their first U.S. stops, in Ann Arbor.

The encore set launched right into ‘Who Are You,’ during which nearly all the performers had an instrument. “We know who you are,” Daltrey told us as it ended, “you’re family.” Now, I can’t speak for anyone else in the room, but I felt damn special hearing that! ‘Behind Blue Eyes’ came next. Before the third song started, Pete Townshend had a slight problem with his guitar, which garnered a reaction from the crowd. “Yeah, you shout,” was his answer. “That’ll make it better.” ‘Pinball Wizard’ offered a taste of my personal favorite Who record, Tommy, and simultaneously brought back cherished memories of seeing Roger Daltrey and Simon Townshend play in Windsor, Ontario last year. But now, it was even more special, thanks to Pete’s presence.

‘Baba O’Riley’ brought with it what was probably the biggest audience participation of the night, with Daltrey playing conductor, guiding us through the song’s enduring lines about “teenage wasteland.” Synchronized fist-pumps went on as the harmonica wailed to the song’s instrumental end. The Who had one last track to rock us with, pulling out ‘Won’t Get Fooled Again.’ Pete, by now stripped down to a plain white t-shirt, leapt about, reminding us all why he is a veritable rock god. Roger, too, gave everything he had for the final, barbaric scream near the end. And he nailed it.

“You’re f**king nuts,” Pete Townshend told us with a smile, and we hollered back in assent. Things got a little strange when Roger mused about how much more affective government would be if we put aside political agendas, realized music was the answer, and gave Congress some really good rock and roll. “They need you, Roge,” Pete informed his bandmate, laughing.

I’m calling it now, folks. Daltrey/Townshend in 2016. …Wouldn’t that be something?

Detroit’s problems are well-known throughout the country, and Daltrey took the opportunity to give our fair city a pep talk: “Detroit won’t be down forever. This is just a season, and season’s change.” The recent death of The Who’s former manager, Chris Stamp, was acknowledged. The band honored him with a lovely eulogy, and we paid our respects with applause. And perhaps the passing of Mr. Stamp made the final number, ‘Tea and Theatre,’ even more poignant. “A thousand songs - still smolder now/We played them as one - we're older now,” pretty much summed up the relationship between Roger and Pete, who, by now, were the only ones left on the stage. Theirs one of those partnerships, I think, that only comes along once in a lifetime, and that only few of us are privileged enough to have. And they know how lucky they are; you could see it on their faces.

They bid us goodnight, and then, it was over.

Seeing The Who as completely as I’m able got me thinking about things I’d tell them if I had the chance. And since VIP tickets were beyond my price range, I’m going to take a moment to say it now, just in case this little review ever gets back to them.

To Roger Daltrey and Pete Townshend: Thank you. Thank you for being the spokesmen for a generation, and for providing the soundtrack to so much of my life. Though I am barely in my twenties, I am beyond proud to call myself an admirer of not only The Who, but of your individual pursuits, as well. Your creativity is humbling, and your philanthropy is inspiring. I owe you so much.

To Simon Townshend: You deserve so much success, sir. Looking Out, Looking In is a fantastic record. And I think I speak for quite a few people when I say thanks for being so generous to your fans, both in person, and on Twitter. You have an incredible support system, and we intend to make you famous…well, even more so than you are.

To Zak Starkey, Pino Palladino, Loren Gold, JG Miller, and Reggie Grisham: You all had giant shoes to fill, and did so marvelously. It was a privilege to see you perform.

Prior to this concert, I’d heard a lot of people shoot the concept down, saying that The Who wasn’t really The Who anymore, if only two of them were left. Personally, I don’t buy that. As long as we have the voice of the band, and the one who wrote the songs, we have The Who. It’s taken a different form, sure, but hasn’t forgotten its roots. And isn’t that the most important thing?