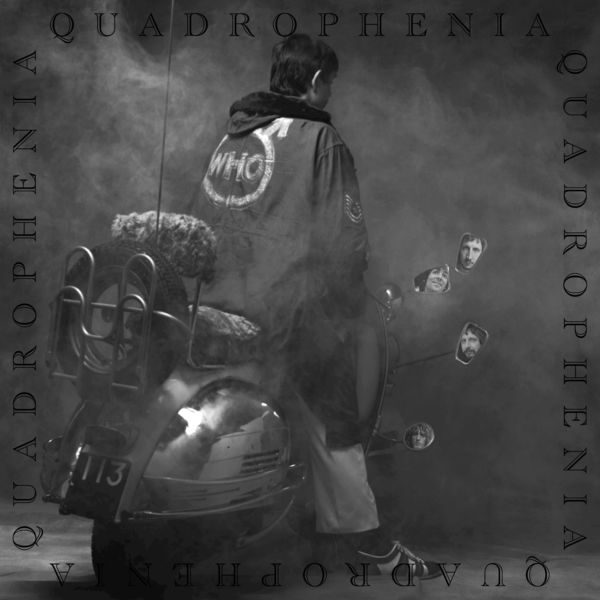 Happy anniversary to Pete Townshend's seminal rock opera Quadrophenia, which was released by The Who 45 years ago!

Work on the legendary album began in 1972 with Pete's demos, followed by recording sessions that took place sporadically over a number of months, whenever the band could find studio time between gigs and various solo projects. The bulk of the recording was done at Ramport Studios in Battersea, The Who’s new studio which was under construction during the sessions. Ronnie Lane’s Mobile Studio was also brought in to help record, since Ramport wasn’t quite complete in time. Quadrophenia was released in the US by MCA Records in late October 1973, and in the UK by Track Records on November 2.

Quadrophenia is the story of a young mod named Jimmy and his internal struggles as he grapples with adolescent insecurities and strife with his family, work, and friends. The plot takes place over a short period of time in his London neighborhood, and culminates in a journey to Brighton, where he takes part in the famous clash of Mods and Rockers on the beach, and tries to find himself at the sea. The term Quadrophenia refers to Jimmy's personality that is split four ways, each way representing a member of his favorite band, The Who. Each personality is represented by a theme, which are all presented in the opening song I Am The Sea, and recur throughout the rock opera.

Pete told the story of Quadrophenia in multiple ways on the album. Through the lyrics and music of the songs, the sound effects depicting the background noises that Jimmy encounters (waves crashing, tea kettle whistling, etc), a wonderful prose from the viewpoint of Jimmy that Pete wrote to introduce the album, and a stunning 44 page book of photos by Ethan Russell that was shot around Battersea in London. Taken altogether, the listener gets a very clear narrative of the whole story.

The Who toured the album in 1973 with the hopes of presenting the whole rock opera as they had done with Tommy, but ended up dropping many of the songs from the setlist due to issues with the backing tapes that were needed to recreate the complex soundscape produced in the studio.

Over the years, there have been numerous Quadrophenia tours and projects. In 1979, the film Quadrophenia was released, directed by Franc Roddam and starring Phil Daniels as Jimmy and Sting as the Ace Face. The film is a dramatic recreation of Pete’s story, with The Who’s music featured in the background as the soundtrack, including 3 additional songs by Pete that were not on the original album. Quadrophenia was also made into a full blown musical in 2009, which was written by Jeff Young and toured the UK for 6 months.

The Who revived Quadrophenia as a live concert centerpiece a few times. Their first performance of it since 1973 was at the Princes Trust benefit concert in Hyde Park in June 1996. The show featured guest stars, including Gary Glitter as the Godfather, Phil Daniels as the narrator, Adrian Edmonson as the Ace Face, and Stephen Fry as the hotel manager. A full tour of the US and UK followed in 1996-1997, which featured Billy Idol as the Ace Face and P.J. Proby as the Godfather.

In 2010, The Who performed Quadrophenia at the Royal Albert Hall as part of the annual Teenage Cancer Trust series, with a string and horn section and featuring guest appearances by Eddie Vedder as the Godfather and Kasabian’s Tom Meighan as the Ace Face. The following year, The Who released Quadrophenia: The Directors Cut 5-CD box set in November 2011, which contained an extensive book written by Pete, and CDs of his original demos.

To celebrate the 40th anniversary of Quadrophenia, The Who launched a full tour of the US and UK in 2012-2013, where they performed the entire rock opera without any guest singers, using 3 keyboard players to recreate the albums orchestrations and background sounds. As a salute, Keith Moon and John Entwistle were featured in video appearances, with Keith singing Bell Boy from a show in 1974, and John performing his extended bass solo from 5:15 in 2000.

In June 2015, Pete released his Classic Quadrophenia album on Deutsche Grammaphon, an orchestral version featuring tenor Alfi Boe as Jimmy, Pete Townshend as the Godfather, Billy Idol as Ace Face/Bell Boy, and Phil Daniels as the Dad. The album was orchestrated by Pete’s wife Rachel Fuller, and was recorded in October 2014 at London’s Air Studios with the Royal Philharmonic Orchestra conducted by Robert Ziegler, and the London Oriana Choir. Pete brought Classic Quadrophenia to the stage for a few shows, debuting at the Royal Albert Hall in July 2015, followed by a brief US tour in September 2017.

While promoting Classic Quadrophenia, Pete discussed the original Quadrophenia album in a 2015 interview with Tim Cooper.

Here are a few excerpts from Pete's interview:

"For those of you who don’t know what Quadrophenia is about, the story is about a young man who is in the mod period, so it’s 1961, ’62, ’63, living in London and he’s having a bit of a breakdown, a nervous breakdown. He’s lost a very good job, he is in love with a girl who doesn’t reciprocate his feelings, he feels he’s a misfit, he doesn’t fit in, and it is about how his journey becomes transmogrified, transformed, he’s actually more like into a spiritual quest. That’s the story, he’s a young mod boy Jimmy. The whole story is told from inside his head. He is a fan of The Who, but what’s interesting about that is, in Quadrophenia he disowns The Who. [laughs] In the fifth or sixth song, Punk and the Godfather, he says: “Listen, you've sold out!”

Recording The Who’s album brought up a lot of problems. There were technical issues. I wanted a quadrophonic album so we had to build a quadrophonic studio. There wasn’t one in London at the time, so we built one. That took about three months. I think the guy that built it for us used an out of work circus, a troop of circus workers to build it. The session went quite quickly. I’d spent a long time working on the music before, so I had demos, I had recorded demos and I had a studio in the country which had a quadrophonic mixing system. So I took the band there and started to work with them. I had synthesizer backing tracks which I already developed for some other pseudo orchestral elements, violins and horns and oboe, and John Entwistle could could play almost any brass instrument with valves and he put on trumpets, baroque trumpets, tubas, sousaphones, all kinds of things to complement what I’d done. At the time we finished we did have elements where we had a massive pseudo orchestral sound anyway, in places. The album was mixed fairly quickly and we went to my studio in the country with a guy called Ron Nevison, who went on to become a quite big record producer in the USA with Jefferson Airplane, Heart and various sort of other Heavy-Rock bands. He and I just together went into a room, mixed it, and took it to rehearsal.

The band never ever managed to play it live very well because we were so rushed in the release, but that process went from August of ’72 on and off, we were touring during that period mainly in the UK, some shows in America and Europe, and we finished, I think, in about December, something like that, and the album came out at Christmas [Editor: November 1973]. So it was a relatively long process but it also felt very intensive and it was great fun, It really was fun. It was one of the nicest times for me, working with The Who. It was the only record apart from Substitute that I produced. So I was able to get exactly what I wanted. I think Roger did an amazing vocal performance, and he and I were at terrible odds through the recording. We weren't getting on very well but his performance is what is fabulous none the less. The band were playing very well. Keith Moon, I wouldn’t say he was at the height of his powers, but he had not yet gone into physical decline which he had soon after. He was thick and strong and funny and wicked.

I think with respect for my work with The Who, I do feel that it is the best work, at least the best constructed, for me as a composer. Whether or not it is the best Who album is another story, but it is one of my favorites because I produced it. I had complete control of it. You know, The Who didn’t do so many records compared to some other artists and had a long period of down time in the middle of our career, so Quadrophenia for me does stick out. It is the most mine, I think. It feels like it is the most mine of all Who records."

Many fans of The Who feel the same about Quadrophenia. It is the favorite of so many of us, because it feels that it is the most ours. The true brilliance of this masterpiece is how we can each look deeply inside of it and see reflections of ourselves.

Many thanks to Pete Townshend for giving us this treasure of an album!