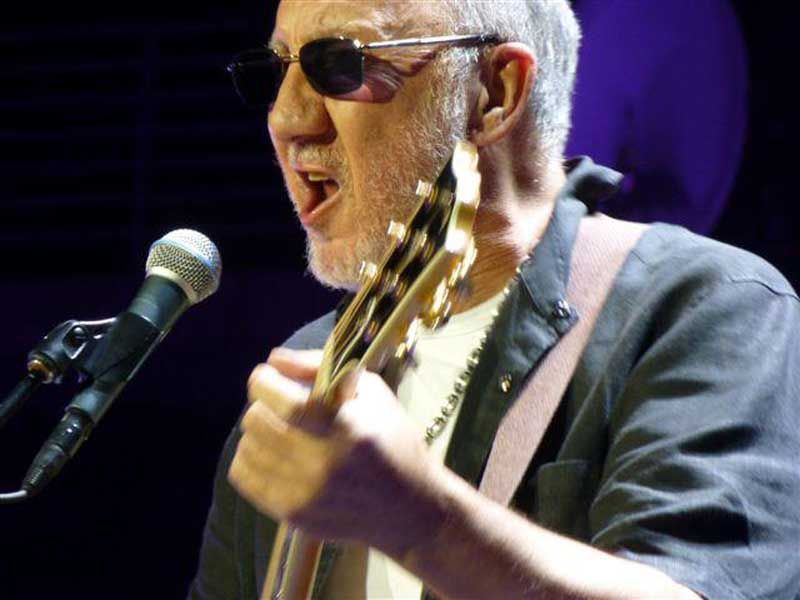 Small, informal pre-show at a very, very crowded pub; good to put names to faces. Venue a typical arena, mostly full, fairly enthusiastic. Seats further back than I'd have liked, but the position had its advantages. As the usher pointed out, we were in the perfect sound zone, and also had a balanced view of screens and stage; any closer and we couldn't have appreciated the visuals, any further away and we wouldn't have been able to see the stage. As it was, both were clear, though there's no substitute for the intimacy of those first couple rows.

Not sure what the hell's going on with Rabbit, but the band sounded great; I liked having live brass. For all my Disco Sisters, I should mention that Roger looked great, chiseled and tan, wearing the jacket he wore for the Olympics over a white shirt that did, eventually and oh hell yes, get fully open. Pete looking good too, and with one or two momentary exceptions, apparently happy. All due and expected windmills, mic swings, and assorted Who-style dancing (you know what I mean.)

Some technical issues with Roger's in-ear monitor that led to Pete singing Drowned; it might have been planned that way, but I didn't get that impression, especially when Pete said, half into the mic, "Roger, what the fuck's going on over there?" after singing the first few lines. Then he finished it out in a best of both worlds compromise: full on band version with the writer's own take on the lyrics. On the drive home, I was still singing "wanna drown in your sweet, sweet love..." Could not for the life of me choose which vocal lead I like better on that one. That said, despite a few lyrical gaffes, all vocals excellent tonight. Enjoyed very much hearing Simon sing Dirty Jobs and thought that was a great way to both handle the narrative difficulties of the song and give Roger a bit of rest. Whether he needed it or not is anybody's guess. My favorite vocal moment of the night was that wicked little high note on the word "laugh" in Is It In My Head. Not only did Roger nail it, with expression, better than on the album version, he struck one of those perfect poses as he did it, one of those moments that just defines the term Rock Star.

In a way, though, the entire show was such a moment, a showcase and lesson in what a rock show can be. While the material isn't overtly spiritual the way Tommy tends to be, any Who concert feels as much like a spiritual gathering as an entertainment; between the quality of the material and performance, this one would've made a believer out of anyone, and on top of that, there were the visuals. Far from a distraction, for me they added layers, not only explained but enhanced meanings far more beautifully and effectively than any narration.

Quad is arguably a nostalgia piece to begin with, written looking back at the band's origins; what the visuals did was take that look back without flinching, then turn it forwards, giving the show not only an aspect of time travel, but of a spiritual journey not individual as in Tommy but communal: history in the best sense. This happened for me in two main ways: the newsreel-style images during the two instrumental pieces, and images from The Who's past. To say too much more might be a spoiler for some, and unnecessary for others, so I will only say ALL members of the band were there in more than spirit.

This wasn't the first time I've wiped back tears during a Who show; my first time seeing Quad performed for TCT a couple years ago was far more emotional in a personal sense, drawing as it did from a very difficult period when this album was an absolute lifeline. Since that show I've been able to finally lay some of that to rest and tonight's emotion came from a different source, from that place of hejira, of pilgrimage and insight conjured by both music and screens. Quad has always been at least as spiritually active for me as Tommy, but it's a far darker magic. Recent turns in my own life have made that useful again; this restaging allowed it to be not just remembered help and hope, but something newly active and vital now, on several levels: personal, communal, and in perception of the band.

Other reviews have mentioned how showing images of the band in their younger days surprisingly makes them look even better now; I couldn't quite understand this until I saw it, but it showed most plainly to me tonight during The Punk and The Godfather. The song became a dialog not only between characters in the narrative and/or voices in Jimmy's head and/or a band and a (disappointed) fan, but between the band now and their former selves. Elegant, eloquent, and simply beautiful.

Also lots of water images, not just surf but a sort of abstraction of rain during Love Reign O'er Me that took the song beyond great moment into peak experience. Even a sort of witty carry-through into the hits set (as best I recall: Baba O'Riley, The Kids Are Alright, Behind Blue Eyes, Who Are You, Won't Get Fooled Again, Tea and Theatre--I may well have left something out): remember the sharks swimming in red from the 06 tour? I think I like them even better than lasers during Won't Get Fooled Again.

Best thing about the visuals: though I've paid them a lot of attention here, much as they rewarded attention, they also "knew" when to back off, didn't distract from the band. There was a natural flow between screen and performance, the two complimented and balanced each other; without absorbing images the instrumental sections might have made an audience restless, but when the music got more overtly dramatic, the visuals would simplify and become abstract, for instance during most of 5:15. I never felt there was a competition between the two. The whole thing felt very well planned and rehearsed, without being mechanical.

Looking forward to the rest of the tour; this is a good'un, and a great time to be a fan.