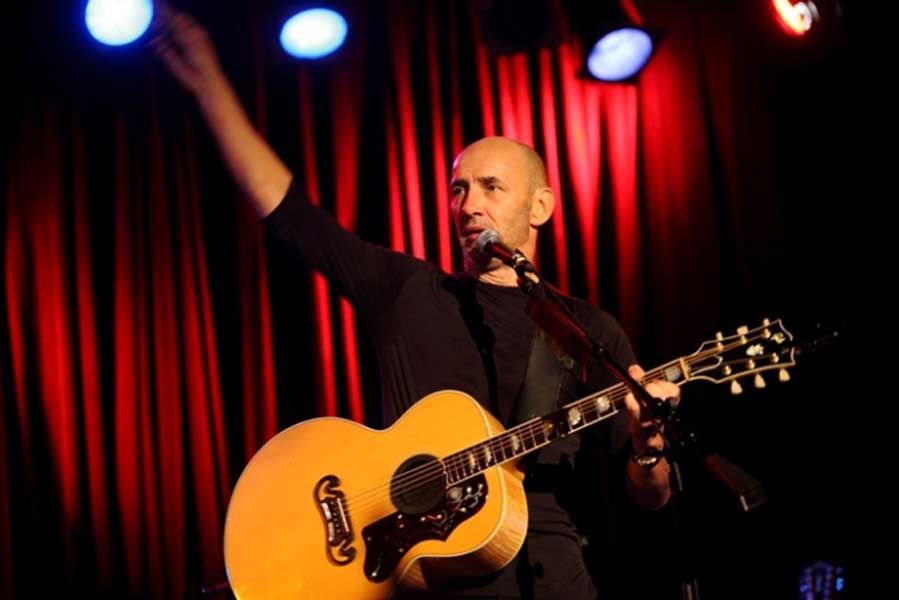 What a lovely evening.

Thank you, Simon, for booking a show the night before the Quad shows, providing us with a great concert and a truly delightful social evening.

And thanks to Martyr's staff, especially Ray, the manager.

They had four tables set up in front of the stage (I was second chair back, center) and some stools/tables around the perimeter of the room.  The rest of the crowd was standing behind the front tables.

Simon's set was excellent.  While I am aching to see him with a band (I've only seen him solo or with Ben), he is a riveting solo performer.  I'd put him, Glen Hansaard (Frames, Swell Season, Once), Paul Freeman, Pete, Melissa Etheridge, Melissa Ferrick, and ani difranco in a similar category of passionate and compelling acoustic solo performers.  I am never bored when any of them are on stage.

My only disappointment was that he played almost none of Among Us, still my favorite of his material.  I'd love to hear When She Sleeps, Save Me From Me, Girls on Girls, etc.

He did a ton of new songs.  Not only did he play most of Looking Out, Looking In, but he has an entirely new album worth of material already "in the can," and he played a bunch of new songs, most of which I liked quite a lot.

Oddly, he spoke very little during the show.  Very little interaction with the audience.  Almost no chatting, no stories, etc.

Electric Friend, Comeback (probably my favorite of the night), Thing About Love (new, guess at title), My Lover (great lead guitar work), Making Waves Also Real (new, written in a dream about Paul Weller) Bed of Roses (very strong) Leaving This Town (new) Life is a Time Bomb (new) Bare Bodes, Bare Assets Stay (my favorite of the LO/LI tracks) Denial (new, I think, dedicated to his daughter, Hannah - very powerful) How to Feel (new, guess at title) Looking Out, Looking In (great lead guitar work), Forever and a Day, The Way is Is (one of my all-time favorite songs, albeit not the greatest performance I've seen), I'm the Answer.

I didn't check the time, but I think he played about an hour and a half, which is pretty reasonable for a club show.  It wasn't quite sold out, but other than a drunk guy yelling shit from back at the bar, and an annoying woman at one of the tables, the crowd was great.

Afterwards, Simon came out and signed CDs and did photos.  I didn't get a photo, but we had a nice connection, and when it comes down to it, that's what matters most.