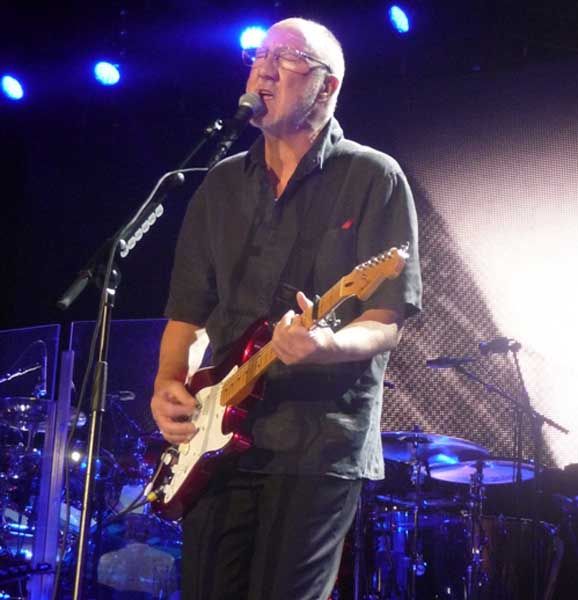 Yeah, we enjoyed Oakland, but there is no way around it, Reno was a better show. Prior to the concert there was an announcement that The Who wished to remind everyone it was a no-smoking event and anyone disregarding that would be asked to leave. I saw (and smelled) no evidence of anyone sparking up during the concert, and as a result Roger motored through without the obvious difficulties he experienced late in the Oakland show. And unlike the last time they played Reno, Roger showed up on time (cough, cough) Pete, on the other hand, had constant difficulties with his guitars, his amps and his monitors, and a fellow named Alan caught a lot of flak for that as Pete grew increasingly frustrated with equipment not operating to his liking. At one point after yelling at the crew he turned to the audience and mugged as if to acknowledge he was acting the temperamental artiste. But he was visibly irritated with things nor working right, at one point he even stopped playing guitar for a long moment as he gestured at the roadies. Even Roger eventually got into the act, yelling and gesturing for the crew to fix whatever it was Pete wanted fixed. Pete's irritation led him to improvise a line in a song about wanting to "smash something" which got the audience roaring, but he of course he didn't actually smash a guitar, damn it.

Pete was visibly looser and more animated than at the Oakland show, he and Roger repeatedly cracked up at jokes they shared with each other, and once Quad was over and they felt free to chat with the audience Pete was joking and telling stories nonstop. After Roger thanked the audience for not smoking pot Pete trotted to his mic and thanked them for not doing heroin, then returned to the mic to thank them for not using amphetamines, after which he said which illegal drugs he's aware of shows how old he is. Pete also commented on them being unable to put up their largest round video screen as the ceiling at the Reno Events Center (what an unimaginative name for the venue) was too low--this meant the audience only experienced a small Keith Moon in the "Bellboy" video, which according to Pete was probably a good thing as the full-size Keith was a lot to handle. It's cool to see Roger gazing at the video screen with a smile on his face as he watches John and Keith in their tribute segments, imagine the memories going through his head at such moments. Pete is pretty loose by the time of the "encore" (they never actually leave the stage) and is using the band introductions to make jokes, apparently focusing on a different band member from night to night. At Reno he did a credible Welsh accent while introducing a Welsh-Italian musician named Pino Palladino, Pino cracked up.

There was a curious incident late in the show where Roger noted that someone who was there night after night was placing a Barbie doll, legs splayed, on the edge of the stage right in front of him, the imagery being wasted on someone of his age. He then picked up the doll to show the audience, and Pete said, "Give it to me, I have a reputation," which I suppose means he's now able to joke about his 2003 arrest.

As I indicated, Roger had no problems this night, and combined with Pete being more animated the music just seemed a bit juicier than the night before. However we were down front on Pete's side of the stage, so that probably made us especially susceptible. The only song I thought was a bit stale at both the shows we've seen so far was "BBE"--it drags a bit and I wonder if it's one they should retire in favor of something less familiar. It's not like they don't have plenty of crowd-pleaser songs to choose from for the closing segment of the show. The Quad songs all sound great, and the obvious numbers like "5:15" have the audience screaming, although I have twice been impressed at how many folks seem to know all of Quad by heart, this does seem to be a hardcore crowd.

As always "Tea and Theater" does an amazing job of reducing a rabid rock audience to attentive silence, but it's a quiet born of affection and respect, not boredom. I for one think this song is largely autobiographical, to me it's as much about The Who as it is part of Pete's latest mini-opera plot, and I think the audience picks up on that. I couldn't get a straight answer from the guys at the mixing console as to whether souvenir recordings and/or videos will be available, but they did admit they've been recording every night so I have hopes something will be available at some point.

I'd also like to mention the opening act, Vintage Trouble. Wow, those guys are terrific. Imagine Blue Cheer fronted by a young James Brown, that's sort of what they sound like, and the peg-legged sharkskin suits and trilbys are a visual accompaniment to their clear affection for vintage soul music played with a highly amplified interpretation. Nice guys to talk to after the show too.

Unfortunately my wife lost one of the Who guitar pick earrings I made for her some years back, it must have come off in the train when she was pulling on her jacket or something. But I'm pretty sure I still have more of those picks so I guess I'll be making a new set, can't have my lady not sporting full Who regalia for the rest of the tour. Two shows down, two more to go.