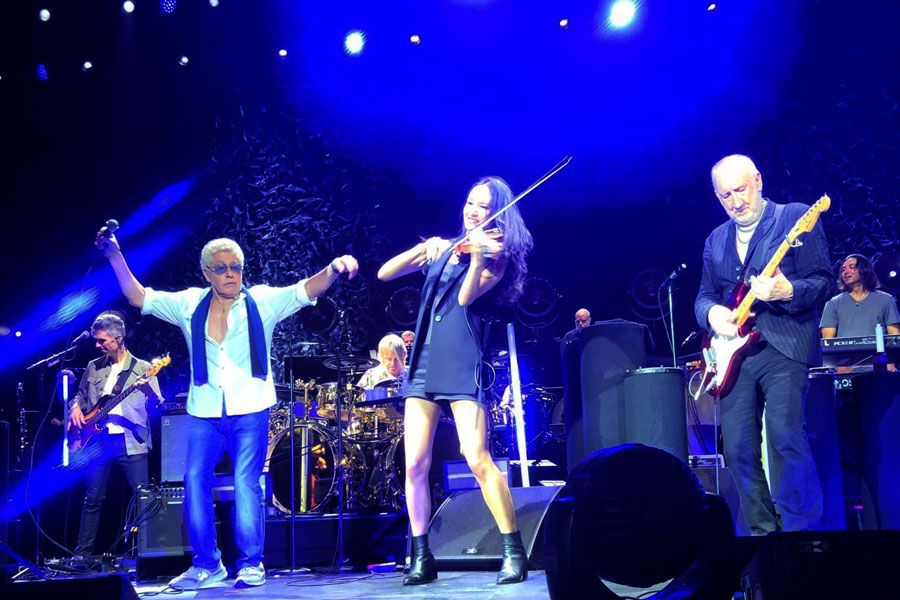 Overture
1921
Pinball Wizard
We're Not Gonna Take It
Who Are You
Eminence Front
Join Together
The Seeker
You Better You Bet
Bargain
Won't Get Fooled Again
Behind Blue Eyes
The Real Me
I'm One
5:15
The Rock
Love Reign O'er Me
Baba O'Riley

The concert on Sunday night was at a venue in the Woodlands, north of Houston. It was a lovely venue but it was outdoors in May in Texas. At 80°+ and close to 100% humidity, it was warm.

Happily, Pete had nearly all of his voice back after close to complete laryngitis on Thursday in Dallas. Unfortunately, the heat made the concert difficult for Roger. At one point, he asked the audience if it was always hot in Texas?

The Woodlands show was virtually the same as the Dallas show as far as the set list. The energy level was not the same. Pete had his voice back and was playfully snarly with the audience all night.

Roger was slightly off all night, culminating in his losing his way in WGFA. I don't know if he forgot the lyrics or he just got messed up, but he stopped singing after the first couple of verses and starting stomping around the stage. Eventually, Pete took charge, counting 1, 2, 3, 4 and to get everyone singing again. Roger found his voice to end very strong with Love Reign and Baba.

All in all a good show.

Cynthia Woods Pavilion is an open-air venue, and it was quite warm — probably high 80s at showtime. Accordingly, Pete wore his warm-weather outfit — suit jacket, no shirt, and a red polka-dot cravat to fill in where a shirt normally would be. Roger wore his usual white shirt, which gradually became soaked with sweat, and jeans. Somewhere around 5:15, Pete unbuttoned the jacket, and eventually took off the cravat. From time to time he’d rebutton the jacket, but the cravat stayed off.

Early on, Pete announced that he was full of drugs (for allergies), prior to Eminence Front…and indeed, toward the end he stopped singing altogether for a time, preferring to solo which Roger and Simon took over vocals, then shouting “dress to kill” at the end.

Just before “The Seeker”, somebody yelled “Turn it up Pete!”, and Pete said, “Should I play at the level I used to play?” and cranked his volume up to max, playing the intro to Seeker. The crowd went crazy, the band came in and Roger came in on cue, singing the first line, but then Pete stopped and said, “It was supposed to be a demonstration…” He turned back down and they started over.

Pete announced that for I’m One, he was going to try something different — instead of singing it, he would croak it. He was obviously making some vocal allowances for his congestion, but it still sounded quite good.

During one song, Pete was doing noticeably fake alligator-arm windmills, and after two or three of them he just abandoned his guitar and started circling both arms wildly with a big smile on his face.

Toward the end of the show, Roger said something about seeing us next time…if there were a next time…”which I very much doubt”, and touring being hard on the old guys. This is the first time I’ve heard anything from the stage about this possibly being the last tour.

Pete didn’t participate in the curtain calls — stood off to the side, waiting for it to be over. I think he just wasn’t feeling very well.

The setlist is becoming rigid — the same for the last two shows, with only one variation from Austin (deletion of What About the Boy?)