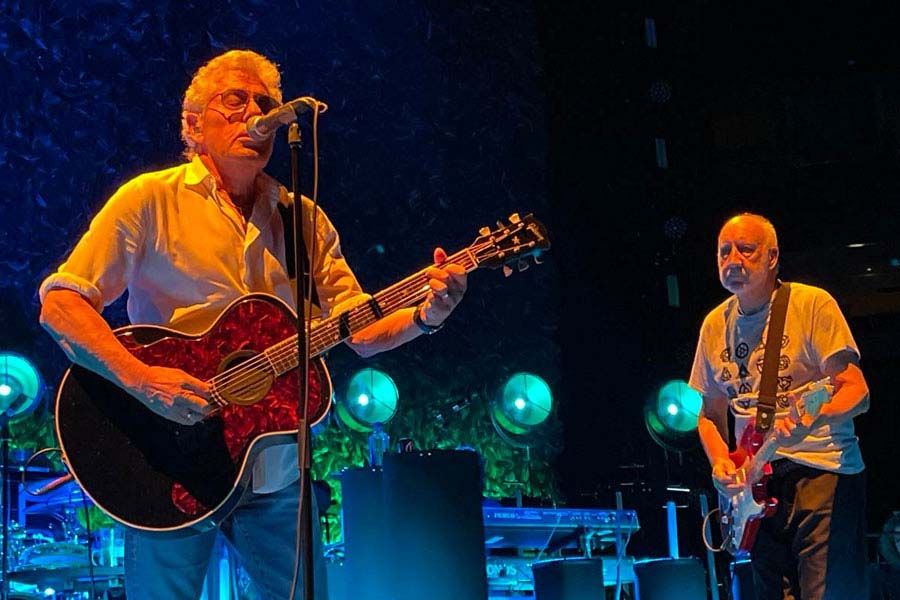 Last night’s show in Denver was terrific. It wasn’t perfect - it wouldn’t be The Who if it were - but the flaws were few, and didn’t stop the action. This was my second show on this leg of the tour - the first was Toronto - and while the set was substantially (but not exactly!) the same, the performances were different.

Where Pete seemed a bit fragile at that opening show, even joking at one point about almost falling over, last night he was strong and sure, bouncing and dancing most of the night, and playing some superb guitar, at one point dropping his pick for some impressive finger picking. Roger’s voice, meanwhile, was rich and solid. Yeah, there were a couple of missed lyrics here and there, but ultimately that’s easily forgiven. The rest of the band provided a sturdy base for the show.

As for the orchestra - absolutely as fantastic as in Toronto (and Philly last spring). Music Director Keith Levenson has the enormous job of bringing together a different group of musicians each performance in the hope they’ll deliver a uniform sound. That he pulls it off is a tribute to him as well as the talents of all these musicians. I did catch one small problem with the orchestra, during Baba. One of the wind instruments was a little louder than it should have been, which took me out of the music for a bit. After the show I got to talk with Keith, who confirmed it was the piccolo. Ah well - just chalk it up to another live Who “Oops” moment.

About the set list - no Relay or Join Together; Denver got Tricky Day, The Seeker, and - YES! - Naked Eye, that last one being a show high point. All we missed was Young Man’s Blues; still hoping for it at one of my remaining two shows. The mood onstage seemed upbeat and playful during the show; Pete claimed to be feeling light-headed from the altitude. Maybe it gave everyone a little lift.

Top line summary:  if Denver was your only show, it was fucking fantastic and amazing.  If you have perspective of many Who shows, it was a strong, solid show, but not especially remarkable.

From the moment they hit the stage, I had a good feeling.  Pete was wearing a t-shirt and no sunglasses.  Both good omens.  Roger was wearing a smile.

The photogs blocking my view, were more of a drag than usual, with an especially tall one planted in front of me, for entirely too long.  And nobody had instructed them to stay out of Scott’s way, so that was a bit of a thing, as well.

The Tommy set was great, as always, although I thought they were periodically out of sync with the orchestra.  I did not notice this the rest of the show. As always Amazing Journey / Sparks is magic, as it See Me, Feel Me / Listening to You. During Sparks, Jon Button had a featured, solo, spotlight and all.  I didn’t hate it, but conversely, it didn’t do much for me.  Mostly just made me a little sad, as it drew attention that what is not there.  Eddie said this was the first time.

The rest of the orchestra set was simply Who Are You / Eminence Front / Ball & Chain (Guantanamo). Super fun at the end of Who Are You.  Pete was off in his own world.  Roger kept being poised to end it, (electric) guitar in hand, but then Pete kept going.  You kind of had to be there, but it was fun for me, with Roger. I continue to pine away for Imagine a Man - my favorite non-Tommy/Quad orchestra song. I wouldn’t mind if either Eminence Front or B&C were traded out for something else.  (I love the new album.  I would love to hear more of it - with my top two tracks, being All This Music Must Fade and I Don’t Wanna Get Wise.  But B&C don’t do much for me, nor does EF.

Join Together has been dropped.  Another one that’s not important to me. It has defacto been replaced by You Better You Bet.  The former was with the orchestra, the later is starting the band set, but they both serve that Roger singalong slot. They did The Seeker for the second time.  I like it.  Don’t love it, but like it.  And afterwards, Pete was critiquing the performance to the band, as if it was soundcheck.  If Zak follows instructions, it’ll swing less and have more fills, in Portland.  Either before or after The Seeker, we got quite the amusing shout out, love note from Pete, going off on one of his little digressions, referring to us first as appendages, and then, attachments, like email.  Should be fun to go back and listen to that bit.

Naked Eye has stayed!  Pete said it was one of those experiments that Roger has tried - that worked.  It’s one of the very few things that could make up for the absence of Imagine a Man for me.  It’s a stripped down version.  Pretty much just the verses, with no extended jam between verse two and three.  I could use with a little more jam at the end, but I’m damn happy they’re playing it, and overall, it’s great.  As for tonight, Roger totally spaced the first line at the beginning, but without the orchestra around, he was able to just keep riffing on guitar for a few extra seconds and re-start.

Another Tricky Day is another personal fave that I’m delighted to have in the set, but I’m profoundly disappointed by Pete’s lack of vocals.  Nothing against Simon, but it was pretty much like a solo Roger show version, and one of my favorite things about the song is the vocal interplay between Roger and Pete.  SING, PETE, SING!!! Personal confession:  I tend to get tweaked out about people referring to grown-ass women as “girls.”  But when Roger looked at me and sang, “Just another tricky day…girl” (instead of fella), my slightly hipocritical reaction was swoon, rather than fuck you.  LOL

No Relay, which a lot of people are disappointed about.  Me, I’m more of a Let’s See Action gal. WGFA - I’m in the minority that preferred the strip down version, mostly because it bores me without John. Behind Blue Eyes is beautiful, always.  Particularly with the current instrumentation.  But I really miss the fully acapella bit from Roger’s solo shows, that Who2 incorporated, for a while.

The Quad set is always great, other than my feelings about 5.15. I watched the video, from beginning until end, in The Rock.  On the plus side, it’s pretty cool that they’ve added current footage, right up through the passing of the Queen.  On the down side, I realize miss the original Keith sequence (that puppy dog eye photo was the best), and I don’t find the current 911 sequence nearly as powerful as the previous one.

Lastly, everyone was profoundly disappointed by the absence of Young Man Blues.  I really, really hope they bring it back.  What a great way to end the show.

Last night was my home show in Denver. I’m sorry I didn’t have time to connect with anyone earlier. Being the home show meant I had home responsibilities and whatnot that put me in the arena just in time for half of the Mike Campbell (who strangely sounds an awful lot like Tom Petty) set. This was my first time seeing them since 2017 I think. For what it’s worth, here is what I wrote after I got home last night:

Words will never be enough to describe the joy that this band has brought me over the years. I never got to see them with Keith Moon but I was fortunate to see them with John Entwistle many times. My mother wouldn’t let me go to the 1982 “final” tour because I was too young, so the first time I saw them live was in August of 1989. I walked out of that show in disbelief and awe. My life forever changed. Tonight, October 17, 2022 was the last time I will see them. Not that they’re retiring but because I’ve decided that it’s time. It may seem silly to some but it’s monumental to me. The entirety of my adolescent and adult life has been spent, in some capacity, wondering if and when The Who would be touring again. For many, many years it didn’t seem possible. We were blessed, however, with a late renaissance which gave us the opportunity to see them many times over the years. I walked out of arenas more times than I can count thinking that THAT was the last one. I thought that there was no way, at their age, that they would come back and do it again, but, yet, they did. Over and over.

Tonight was awesome. They defy their age, however, for the first time, it seemed diminished. It was never going to be what it was but tonight was the first time I really felt their age. That explosive energy wasn’t there any longer. The edge was gone. It wasn’t that long ago that it was still there.

Live music is one of the pillars of my life. I’m always seeking out new music but there will never be another group of musicians who come together to create the combustion of The Who. They weren’t The Beatles, Stones or Zeppelin. They were something different and more complex. They were diverse and bombastic. Pete’s writing was unusual but brilliant. They represented power. Daltrey, Townshend, Entwistle and Moon were always more than the sum of their parts. They were The Who.

I feel infinitely fortunate that 45 times I got to walk into an arena and experience something that can only be explained as transcendent. As my bands continue to fade away into the ether, I’ll be forever grateful for all of the moments I got to spend with The Who.