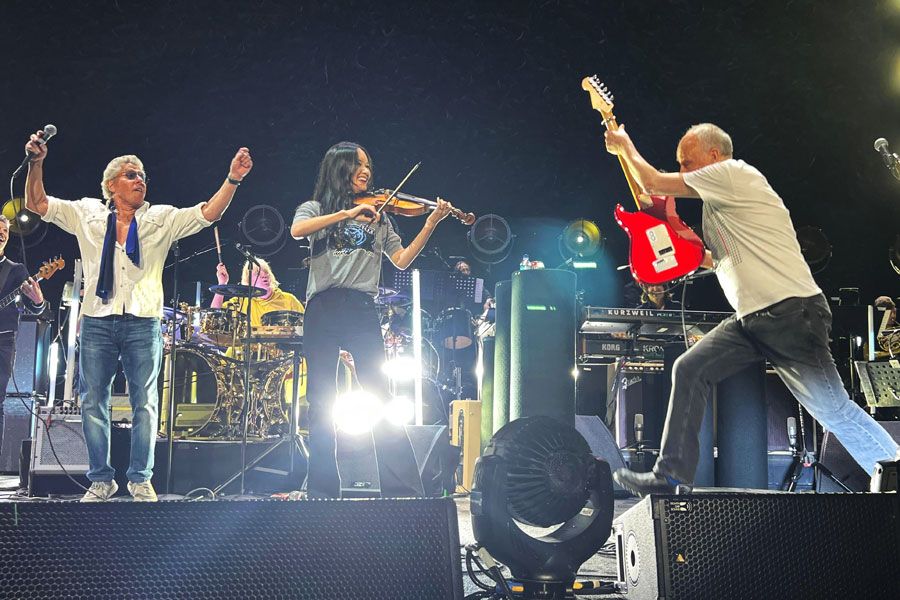 (the professor with the tattoos)

The Who did not disappoint in Memphis at the FedEx Forum on a Friday night after a stormy day (drove from southern Illinois in the rain from about three hours away). Anticipation rising in the building as time approached for The Who to take the stage with Billy Nicholls returning to the lineup.

The Tommy section was upbeat and strong. Amazing Journey and Sparks were forcefully delivered. Roger came out strong and did the crouch before Pinball Wizard like a pro (which he is). We’re Not Gonna Take It was powerful (and a personal favorite).

Pete apologized for still having some throat issues but delivered on all fronts including Pinball Wizard and Eminence Front. He and Simon were in synch all night. Pete delivered during Behind Blue Eyes as well along with Katie Jacoby and Audrey Snyder. Roger inhabited the iconic number (and another personal favorite).

Roger had fun engaging with fans during Who Are You (no f bomb this time), Join Together and You Better, You Bet. He smiled, gestured, and moved around as he does. When he points at you, you respond! And when he twirls the microphone, you have to cheer and play along.

Roger gave Pete grief about Pete’s need to adjust settings on his amps and the like during the show. His response was Roger’s system was all around the venue and taken care of. Pete was frustrated several times but pushed through. On a positive note, Roger did not appear to have ear piece issues tonight. The banter was kind hearted; amazing to see and hear the two go back and forth like two…old friends.

I’m One and 5:15 were tight and, yes, powerful. Doesn’t matter if it’s the first time you hear the pair or the 200th, they pack a punch with the vocals and music. The orchestra accompanied and elaborated on the themes and looked to be enjoying themselves all night.

The final pair of Love Reign O’er Me and Baba O’Riley are always show stoppers and were a thrill. The Forum was one with so many singing along and arms in the air. The energy was palpable as it had been building all night especially from when Roger sang Won’t Get Fooled Again with passion and conviction. Definitely an amazing journey…thanks so much for your artistry Pete and sharing your interpretations Roger.

Shout out to keyboardist extraordinaire Loren Gold, such a presence in all songs no matter the tempo or mood. And, as evident all tour, Katie Jacoby brought the house down with her solo to finish Baba O’Riley.

And, in Roger’s words, Be lucky everyone and see you soon (MSG on the 26th).

Normally I write down some notes in the hotel, make it home, then write them up there. This time I brought the laptop with me and will try to do this while it's fresh. This also means it's been a long day and night and into the next day, but we'll see how it goes.

Overture: all I could think about was how good it is to be here. How Incredibly. Good.

1921: In some ways Roger had an uneven night; he firmed up as things went along, but this one didn't go so well. He can still hit the notes and then some, but the lyrics can be hit or miss; I'm sure this must be frustrating for him, but as far as I can tell he takes it in stride and makes up for it with extremely clear and intense moments when it counts.

Amazing Journey/Sparks: Roger comes back strong, and I could feel the whole thing start to lift off.

Pinball Wizard: the crowd so into it!

We're Not Gonna Take It: Normally it's the "listening to you" part that gets me, but tonight it's the title lyrics. So much frustration over the last two-three years and nowhere to go with it. Until now. "Listening to you" is a joyful chance to point back at the band so as to say: thank you. Thank you for coming back, for being here, for making all this happen again.

Who Are You: That bit in the middle where Pete makes an acoustic guitar fly? This time he did it on electric. And this is as good a place as any to mention how tasty his guitar work was tonight, lots of what I think of as that north of midnight sound; no one else does it like him. Also, thinking about that line from the extended version of The Kids Are Alright--"We're all in the Who"--gives an extra layer to the call and crowd response exchange of "Who are you? Who, who, Who who."

Eminence Front: Pete mentions he's been ill, not sure if it was "the big thing" or not, but it's affected his voice, so he's not certain how this one will go. At the moment, he feels vocally "somewhere between Elvis and Louis Armstrong." We get the Louis Armstrong version, but I think it may have been at least partly on purpose; he sounds fine later on during I'm One.

Ball and Chain: Good to hear the new stuff. And I realize a few things about the difference between truly hard core crazy traveling fans and more regular ones as the folks around me take this as a conversational moment. Doesn't bother me, I'm focused, but there's a difference between how it is tonight and how it is to be surrounded by like-minded people, even if that mind is arguably a little insane.

Join Together: The violins get up and leave quietly, because they can. My place tonight is somewhat to that side, not so much in front of Simon as in front of Katie Jacoby. As a result, I get to see more of the orchestral musicians and how they react to things, including the fact they are free to react, and the interaction between stage and audience. In their usual world, I doubt that happens very much. Also, not being right in front of Roger and sort of locked in to him, my attention gets more evenly distributed around the stage. I'm especially keyed in to Zak's drumming throughout the night, and some choice moments of Simon on guitar.

The Seeker: During this one, I think about a coworker quite a few years back, into death metal or something like that, who randomly encountered this song and knowing I was a fan, said to me: I don't know if I like the music or not, but whoever wrote that, he knows exactly how I feel.

You Better You Bet: It's a treat seeing the couple on one side of me sing this to each other. Also, when Roger comes over to my side of the stage, aiming his mic and playing choir director and of course I'm singing my little heart out for him, there's a quick moment of communication, and that good feeling of being locked in, just a taste of it. That taste is sweet.

Relay: We're Not Gonna Take It was an angry catharsis; this is a joyful one, the relief of connection, of all being here together.

Won't Get Fooled Again: It strikes me how many of these songs push back against power, or maybe that's just me. More crucial in this moment, though, is that it's not an acoustic version. It's the full on, plugged in real deal, which means we're gonna have to deal with The Scream. Realizing this the minute they start to play brings tears to my eyes; courage, there. And when the moment comes--well, all I can say is if it was taped, he did one hell of a job selling it. I was a bit overwhelmed.

Somewhere in the middle of all this, as Pete is trying to get one of his pedals to work, Roger comments about guitarists--how they have all these lights and things, he wishes he had something with lights. Pete replies that maybe Roger should be attached to wires so he can float up above everyone else, up in the stratosphere...the riff doesn't really go any further as they head into the next song, but resurfaces later.

Behind Blue Eyes: Ah, Katie and Audrey. Good to see Audrey back, glad she's feeling better. Roger describes the weirdness of touring with Covid precautions, how anyone who gets it has to stay in their room for five days and get fed under the door. The orchestra really lifts this one to another level, even if it does take away a bit of freedom--and as always, that moment of a cappella vocal harmony just soars.

The Real Me: Speaking of overwhelmed. The Quad set always gets me. I remember the first time I really heard this, the beginning of the album, the way the voices seem to come out of a mist along the shore, then that growl: can you see the real me? can ya? can ya? then into it. And into it, I am.

I'm One: Spotlight on Pete at the beginning, and I'm thinking of him singing Blackbird at the end of Animal Requiem, back before the pandemic. The simplicity of it, then here tonight the orchestra rising behind him, the layers it brings; a new appreciation of that, and of Pete as a composer as well as a songwriter.

5:15 Not a lot of thought beyond this point, just completely in the moment, taken by the music. Some slight memory of seeing this at the Indigo2 shows years ago, first time I got down front, and just what a rager this song is.

The Rock: The place this one always takes me, a moment when I realized survival might just be possible; it gets easier every time, and sometimes I think every time I'm sending strength back through time to the girl I was back then, that each of these moments links back to that one. After all, as Dan Bern would have it, time is God's secret weapon...Also, the couple on one side of me smiling at each other, the couple on the other side just frankly making out. I don't mind; tonight the music is my lover and I don't care who knows it.

Love Reign O'er Me: The piano intro is a thing of beauty in itself. Roger comes back in a scarf and in total command of the house, and his voice. Let's just say I felt the rivers flow.

Baba O'Riley: The emotional yet philosophical realization that it's coming to an end; when this song is done, the night's over. I don't want it to be, but at the same time, I accept it. More would be too much. And Katie plays the hell out of the solo; not just musically, but in terms of showmanship.

While the principal cast lines up for their bows, Roger mentions that no one introduced the most important person here, the one who makes it all possible and without him none of us would be here--because he writes the songs. Then Pete replies that Roger really does belong up in the stratosphere; such a great singer. Then they all bow, and Roger closes it out with a resounding wish that we will all be happy; be healthy; and above all...BE LUCKY!