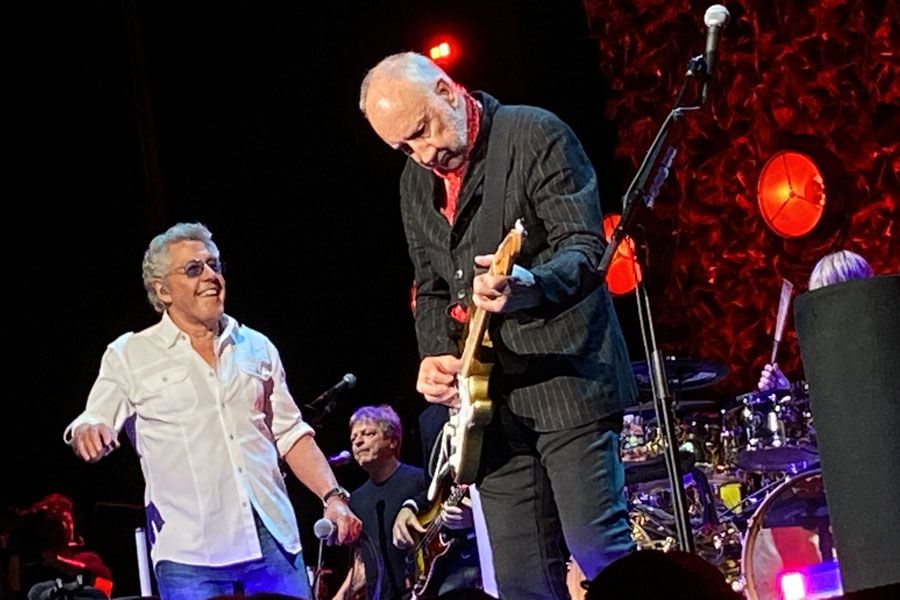 Overture, 1921, Amazing Journey, Sparks, Pinball Wizard
We're Not Gonna Take It
Tommy part 1
Tommy part 2
1921
Pinball Wizard
We're Not Gonna Take It
See Me, Feel Me
Who Are You
Eminence Front
Eminence Front
Ball and Chain
Join Together
The Seeker, You Better You Bet, Relay
Relay
Won't Get Fooled Again
Behind Blue Eyes, The Real Me, I'm One, 5:15
5:15
Love Reign O'er Me
Baba O'Riley
Baba O'Riley

The show in Washington DC on Monday was excellent. Both Roger and Pete were on fire all night, seeming to enjoy the audience and performing together. No tantrums or frowns all night.

The set list was consistent with other shows, with Relay now a standard addition to the band only section. Happily, WGFA continues to be performed with the entire band, not just Roger and Pete acoustically.

After they performed Ball and Chain to a less than overly enthusiastic reception, Pete laughed and assured us that it was the only new song that they were doing. Too bad as there are other more entertaining choices on their last album.

He then recalled how the audiences reacted to the band performing Tommy back in 1969 when it was first being introduced. He said the audience just sat, arms crossed, waiting for them to do My Generation or Substitute or I Can't Explain, demonstrating the sulky, dour look before he laughed again.

Pete was playful all night. For example, he introduced Keith Levinson as Pete Townshend during the band intros. He also had some fun before BBE after Roger introduced Katie and Audrey, Pete then introduced himself as one of the support players for Roger Daltrey, saying Roger's name with feigned drama before he broke out laughing.

When the orchestra returned after their break, Pete expressed how he thinks the orchestra perfectly enhances the Quadrophenia songs. Wouldn't it be wonderful if they did a mini Quad tour with an orchestra in 2023.

Loren's intro to LROM was unique and as entertaining as always. Roger was masterful and passionate in his LROM rendition. And the orchestra adds so much to this song and The Rock.

Roger was dancing all night, joking with the audience, and milking audience participation in Join Together, YBYB and of course Baba.

This leg of the tour has only two more shows, Madison Square Garden on Thursday and Bethel, home of Woodstock. on Saturday. The band, especially Roger and Pete, are hitting on all cylinders as it winds down.

As an aside, Monday was Terry McBride's birthday. A few of us yelled this to Roger and he wished him a happy birthday at the end of the show.

The Who did not just not disappoint, rather they amazed. They were relaxed, precise and seemed to enjoy themselves. Pete was jovial and everyone had a good laugh when a guy yelled “I love you Pete”. Roger’s voice seemed like from back in the 70’s. The orchestra was smaller than the last tour, and seemed just right. The earliest songs were from Tommy, and they progressed chronologically from there. Everything was spot on. It was truly a blessing to see them.

When I left, I had the good fortune to run into one of the local orchestra members (cello), who said “I had one of the best times of my life playing tonight and if the rest of my year sucks I will not care.” That was great!

Capital Rocked by The Who in Triumphant Performance

Monday at Washington's Capital One Arena, The Who wowed a boisterous crowd of more than 15,000 by performing swaths of the famous Tommy, and acclaimed Quadrophenia albums, complemented by a smattering of hits. It was a special night for this writer, who had always seen the British Invasion bands as rock’s crème de la crème. While such US bands as CSN&Y and Chicago had made it pretty big… no one had the same level of fame or influence as The Beatles, Who and Rolling Stones.

The Who’s performance truly amazed. The songs were presented crisply, and in a manner very consistent with studio versions. Lead vocalist Roger Daltrey hit all notes taken, and Pete Townshend worked diligently to rock with his power chords. Both sang well in both lead and harmony efforts. From the opening notes of Tommy’s majestic Overture, the band – complemented by a 48-piece orchestra – grabbed control of the audience’s senses, and didn’t let go.

The 70-something rockers worked hard to manage technical challenges. In just the second song, Daltrey yanked out his earpiece, presumably due to yet more sound problems endured in this tour. Townshend worked diligently, sometimes mid-song, to ensure that his guitar was properly tuned (during ‘Sparks,’ Townshend had to change out guitars). These efforts made clear that The Who was, as ever, there for its audience, and intent on giving its all.

Townshend exhibited good humor while he enjoyed raucous adulation from the crowd. (At one point, Townshend playfully bragged that he was hearing ‘I love you’ from a large number of men in front.) While Townshend expressed thanks for the audience having come out despite the covid threat, he concluded with, “f--- the pandemic.” Soon thereafter, the showman inside Townshend introduced himself. In the middle of ‘See Me Feel Me,’ he began his customary windmill strumming move, and approval was lustily roared by nearly all in the arena. And humor was never far away from Townshend’s repertoire. In the middle of ‘Eminence Front,’ while singing that, ‘drinks flow… people forget,’ Townshend obliquely alluded to his own struggles with alcohol when he deadpanned, mid-chorus, “I’ve seen it happen…”

Notwithstanding the show’s quality sound, the orchestra’s work was not without a hitch. During ‘Sparks,’ it was difficult to discern Townshend’s lead guitar playing, just as, during ‘The Rock,’ it was challenging to make out Zak Starkey’s propulsive drumming. But, as Townshend introduced Quadrophenia, he mentioned his pride at the orchestra’s work, and said that its integration with the band during this portion was especially powerful.

I’d contend that – through its diligent work and wonderful sound – The Who showed how a legendary band can enter its senior years with grace and even honor. Tragically, the Beatles didn’t have the chance. And, the Rolling Stones seem incapable. But, the Who has pioneered. Again.