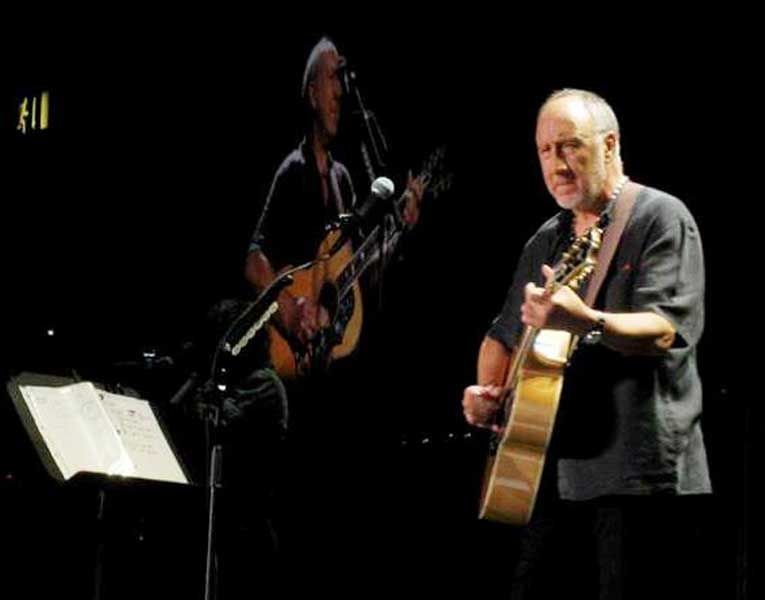 It really is getting a bit pointless trying to review these shows because they are all just varying levels of complete genius - and Birmingham was no different. You find yourself looking for the slightest variations - a longer solo, a look or utterance to compare it with another show; but they are all fantastically brilliant. So I will just report the variations because we know the rest of it was awesome!

There were a few bum chords/notes last night with Simon seeming a little off his game; Pete dropping a few clangers and Loren Gold playing a wrong chord at the start of Baba O'Riley, but somehow it all adds to the excitement of the gig. What came across was how they all just lapped up the mistakes and looked at each other and laughed - this is a well balanced band who enjoy playing together.

'5.15' was up there with Manchester, Pete adding an oddly timed riff at the end to try to catch out Scott - who wouldn't be caught out! It was another long, extended version with Pete soloing again at the end. 'Drowned' was a powerhouse performance; 'Dr. Jimmy' dangerous yet again. Another rock solid interpretation of 'Quadrophenia' - if this is their last hurrah they have cemented their legacy as the greatest live act of all time.

The hits section was great. Special mentions for 'Pinball Wizard' - the intro where the bass comes in over the main riff was so powerful you could feel it; and 'WGFA' where we were treated to the reprise - Pete almost did it at Cardiff but tonight was the full monty. The band looked and wondered what he was doing but they joined in and it was great to see/hear.

The introductions were a doozy! Pete referred to the boos during 'The Rock'.... (this is from memory btw lol)

Roger: Thanks for coming here and not Glastonbury!

Pete: Well you can go tomorrow and watch The Rolling Stones.

Pete: You yobbos booed Princess Diana (it was in fact Thatcher).
You bunch of cu*ts! I liked her, did you Rog?

Pete: She went down well in Ireland too!

To top it all off the fantastic stewards at Brum let my daughter go down to the front ( we were row 8) and Scott took the time to come out of the lineup while Rog was thanking Pete and throw her his drumstick; then Pete waved at her and said 'Thanks' - you're welcome Pete!

The overwhelming feeling from this tour is how they are enjoying every moment - it is a joy to see.

Review by Lauren From Boulder
(With a bit of help from H and Eddie.)

Highlight of the Night:
Roger's backing tape didn't activate so he sang the whole of Punk and the Godfather.  (Had we been in the US, Punk MEETS the Godfather.)

While I understand the IDEA that he's going for with using his own canned vocal to create the dual characters, IMO, the song is MUCH better when he just sings it.  That's how they did it on the first US leg, and it was my favorite song of the show every single night.  (Well, it still is, even the other way, but it's not NEARLY as strong with the canned vocals.)

Lowlight of the Night:
Due to the low ceiling at the venue, the band only had the one small portal set up, kind of like Las Vegas.  Fortunately, Who2 puts on a damn good show, that stands up on its own, but most of the stage production is really lost without the portals.

Overall Summary:
Average show overall.  Not a complaint and only judged in relation to themselves.  A great night was had by all.

I didn't take notes during the show, so I don't remember a whole lot of the details.

There was definitely some new footage, although it was kind of hard to track with only the one small portal.  The most noteworthy change is some added Keith photos during Bellboy.  Very nice.  I wish Roger had used the opportunity to switch out the John solo for a better one (this is arguably the weakest of them all), but I'm not complaining.  Even weak John is the best thing ever.  The other footage changes seemed fine, but not especially impactful.

I already mentioned Punk.  Roger now plays harmonica on I'm One, which is a nice addition.

There was one song fairly early on where Roger was doing some serious mic twirling, and I thought he was going to miss his entry cue, but he hit the mark perfectly.  Later in the show, his twirling mic hit one of the stage lights, making quite a clunk.

What I really miss in Dr. Jimmy is Pete singing the lines - "He only comes out when I drink my gin."  He hasn't sung it at all this rendition, but he did in the '96/'97 production, and I thought it had tremendous resonance.

You Better You Bet replaced behind Blue Eyes.  How pathetic is it that I was excited to hear YBYB, a song I don't even particularly like, just because it was SOMETHING different?!

Late in the show, Roger thanked everyone for not being at Glastonbury, although Pete said, "You can still go tomorrow to see the Stones," which elicited a resounding round of boos.

He also commented on the boos for both Princess Diana (during The Rock video - I didn't even notice) and  for the Rolling Stones, calling the audience, "cunts," with a smile.

During the back and forth chat around that, we learned that A) there were big time boos for Princess Di in Ireland and B) Roger would have shagged her, given the chance.

As a side note, I was talking to my local friend John H. tonight, and he explained that the booing during The Rock and especially at Newcastle (the other show he went to) was NOT for Princess Di, but rather, for Margaret Thatcher.  Someone should explain that to Pete.

Also during The Rock, John's death hit me especially hard.  Some nights it's harder than others.  This time, the night after the anniversary of that shattering day in Vegas, it hit me particularly hard.

Unrelated, Scott very kindly came out to the edge of the stage at the end of the show and tossed a drumstick to Gareth's daughter.

Oh, and before I forget to mention it, there's a fantastic picture on Scott's bass drum.  It's a B&W still shot from the Quad movie.  It's the whole gang in the street.  I think it's from "We are the mods."  LOVE IT!

During T&T, A) Roger almost forgot his cup of tea, B) Roger's voice was getting a bit sketchy, and C) Pete didn't want to have some tea with Roger.

Side Note:  Every so often, Pete talks to me during the show.  It's so frustrating that I usually can't make out just what he's saying.  I love that he does it, but I wish I could lip read!

So my girlfriend and I travelled up to Birmingham to catch the Who (me for the second time this tour, her for the first time since 2007). The smaller arena only afforded room for the centre of the 3 circular screens but our seats in the 6th row were excellent so we didn't need them except when John and Keith were projected up there.

People were still finding their seats as “I Am The Sea” started to play (shame if they missed the excellent Vintage Trouble). Then “The Real Me” started up, like the gig at the O2, it was so quiet I could easily hear myself singing along. However the sound was very good and the band looked energetic. If anything the second time seeing this show seemed to pass quicker. I was used to this production now but that didn't spoil it or make it less exciting at all. This time Pete seemed a bit less keen on playing solos compared to the first O2 gig but he was still very energetic and it was a thrill seeing him windmill so close to us.

On “I've Had Enough”, Roger swung his mic at the start, missed catching it, tried again and caught it just as he sung the first lines. It was a badass moment which was slightly spoiled when he smacked the mic off one of the monitors a minute later, producing a loud thump. What the hell, most people probably didn't even notice.

Towards the end of the gig Pete thanked us for coming to see them and not going to Glastonbury to see the Stones. The Stones got a big boo, prompting Pete to call us a bunch of c**ts. Classic Pete! At the end during Tea And Theatre, Roger looked over to Pete, singing “will you have some tea?” Pete stared at him and shook his head. A funny moment followed by Pete running off stage when Roger tried to hug him.

All in all the gig was a great packed out celebration of Quadrophenia, put on the way it should be. It's only taken 40 years and the loss of two members to realise the definitive live production. It's a shame it couldn't be this in 1973, but listening to the concert, it was hard to fault anything. Roger sang very well despite being a fair way short of his late 20s best. But I could count the dodgy moments on one hand. Pete still seriously has some energy and desire for entertaining. Looking at the Stones at Glastonbury this weekend, the difference between him and Keith Richards is remarkable. Put simply, Pete Townshend is the coolest man in rock.

Before this tour I wondered if I would enjoy seeing Quadrophenia live several times (as much as I love the album which is the greatest rock record of all time in my opinion) but I have to say the Quadrophenia and More Tour is one of my favourite Who tours.