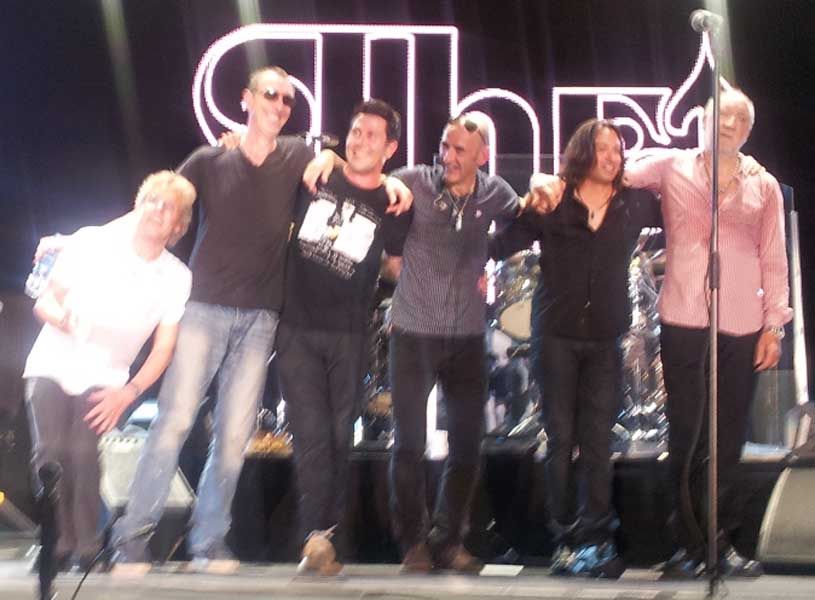 Quite simply - a stunning show. It's almost 40 years to the day since I bought the original album and I can scarcely believe that I am about to see The Who perform "Quadrophenia" in its entirety at this cavernous arena. Vintage Trouble are an excellent opening act and incredibly have the crowd dancing as front man Ty leaps down from the stage to dance in the aisles.

At exactly 8.30 pm the sound of crashing waves rumbles across the stage and the four themes of "Quadrophenia" echo around the hall. The band take up their positions with Pete on the far right as he slashes into an explosive and tempestuous "The Real Me".

The stage is awash with lights, screens and technology and it's pleasing to hear Roger in such incredible voice after the rigours of this pretty extensive tour. All the songs are delivered note perfect with passion, fire, enthusiasm and commitment. Even what you might call "the lesser songs" like "Helpless Dancer" and "I've Had Enough" tonight are played with an epic grandeur and a real feeling of total immensity bringing an astounding vitality to the whole production. Simon shine on his "The Dirty Jobs" and his guitar playing throughout is outstanding. The band are tight and slick - in a good way and are clearly road-honed and well rehearsed.

The obvious high points are a thundering "5.15" in which the appearance on screen of a virtual John raises the roof as "thunderfingers" delivers a blisteringly powerful bass solo that sends shivers down my spine. Later, a rousing "Bell Boy" has a virtual Keith Moon on comedy vocals with the crowd cheering and shouting for "Keith!" You're tempted to think that this wouldn't work and would be a bit mawkish but it totally works and works in bringing John and Keith right into the show and leaves Roger looking a little teary eyed.

The albums two instrumentals, "Quadrophenia" and "The Rock", are absolutely sensational giving the ten piece band full reign over the material making it sound fresh and alive. All too soon we are at the end of the main section of the show as the tinkling piano leads into a staggering "Love Reign O'er Me" which brings things to a close in spectacular fashion.

After much cheering and chanting of "Who, Who, Who" the band conclude by delivering an impressive selection of classics including leading off with an anthemic "Who Are You" with Roger spitting out the tale of Pete's soho debauchery back in the late 70's and there's a rousing cheer as the screen spells out "Rock on Geordies". A surprise "You Better You Bet" replaces "Behind Blue Eyes" but is a popular choice with the crowd. Perhaps Roger is finding "Eyes" too much of a challenge - though his voice seems in excellent shape tonight.

"Pinball Wizard" follows, it's a song that I think they have played every time I've seen them but it remains a thrilling romp highlighted this night by the on screen visuals that has hints of "Tommy" with the big silver ball flitting around the screens. An electrifying "Baba O'Riley" has Roger's wailing harmonic fed finale bringing the crowd to their feet again. The end of the show is almost upon us as we hit a climactic "Won't Get Fooled Again" with Roger's ending scream bringing the crowd to fever pitch. As the band file off stage we are left with Pete and Rodger to round off proceedings alone on stage with a touching "Tea & Theatre". Long Live Rock indeed!

So there I am, on the train to Newcastle, listening to some stuff (not Who related) on the ipod, reading the newly published book on the Profumo scandal, and we reach Sheffield.

There's about 2 hours to go from Sheffield to Newcastle, and I'm quite happy. The ipod is quite quiet, and I hear some people talking as they come into the compartment.

I feel a disturbance in the force.

Followed by several other Americans.

I am so surprised I say Frank? Frank Simes? He turns around and says "yeah"

I can only stupidly say "what are you doing on the train"?  He looks at me quizzically. The Pino Palladino enters the compartment and I know that I am now in a surreal quantum parallel world to the world I was in when I got on the train in Birmingham.

I gather my wits and say to Frank that I had seen him with Simon outside the Newport venue on Roger's Tommy tour after the show.

I then say Hi, Mr Palladino. He turns around and smiles and says (obviously thinking who the hell") hello.

Over the next two minutes I establish the fact the band, less Simon (playing in Sheffield that night) and Roger & Pete, are on the same train as me, in the first class compartment with me.  For two hours.

That's not what happened at all.

I had a brief chat with Frank, and Pino about the tour, and yes Pino and I did talk briefly about our common heritage as Cardiff boys,.

It transpires that the band are travelling between venues on the train, rather than use a tour bus. I decided not to ask how Roger & Pete are travelling ( I assume flying up and down, or being chauffeured) from London to each venue.

Anyway, when we arrive in Newcastle, no one says "Hey John, here's an invite, come along to the dressing room before the show to meet Rog & Pete" which I thought they might do especially as I let them get on with their card game while I read my book ;- )

Now this kind of story is usually not believed, so here's a picture of me and Pino out of our brains on the train!! 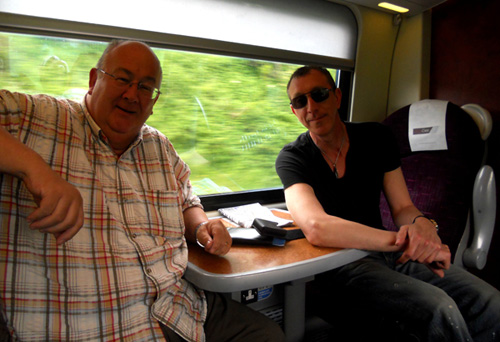 My brother, his son and myself had an enjoyable night at the Newcastle show - got my copy of looking out looking in signed, mentioned I'd be at the Hare & Hounds set, and went in to watch Vintage Trouble.

They started their set dead on 7.30, and were off stage by 8.10 as they were playing in one of the Universities in Newcastle later that night.

The three of us thought V T were splendid. Rock soul with a hyper singer running around the audience singing to people (mainly women) during one song.

The Who appeared I think just about on the dot of 8.30, which was pretty punctual for a band these days! (Rihanna kept audiences waiting for 2 hours at a show in the UK earlier this week)

I knew pretty well what was coming, from all the reviews and comments here, so I was waiting for the Quad experience, though my nephew would have preferred more of the songs he's heard my brother play, as he'd never heard Quadrophenia before the show.

Roger said at the end he was suffering from hay fever, which is why he was struggling a bit.

As David said for him, and from my part as a fan, it was a pretty damn good show. II thought Scott Devours was really good, and fitted in well.

What was intriguing was that I haven't seen Pete smile so much. He seemed to be positively chortling along, gesticulating for towels, etc as it was so hot in the venue - his shirt was absolutely soaked.

At one point too Roger said it was like a bleeding oven on stage.

The other thing about the heat was that I think it was causing trouble for Pete at one point with his red strat, which he seemed to have trouble tuning.

All in all, a good show.

arrived today at Newcastle station for my train back to Birmingham, and yes, the whole band were there again!

Only this time I was going to Birmingham and they were going to Manchester.

So no travels with Pino and Frank today, but I was a little cruel to a fan I saw sitting down at a cafe in the station wearing a Who t shirt, and I told him if he went over to the entrance to the station he'd see the band there.

I think he might have sworn quite a lot if his girlfriend hadn't been with him ....

I think he thought Pete and Roger were there ....