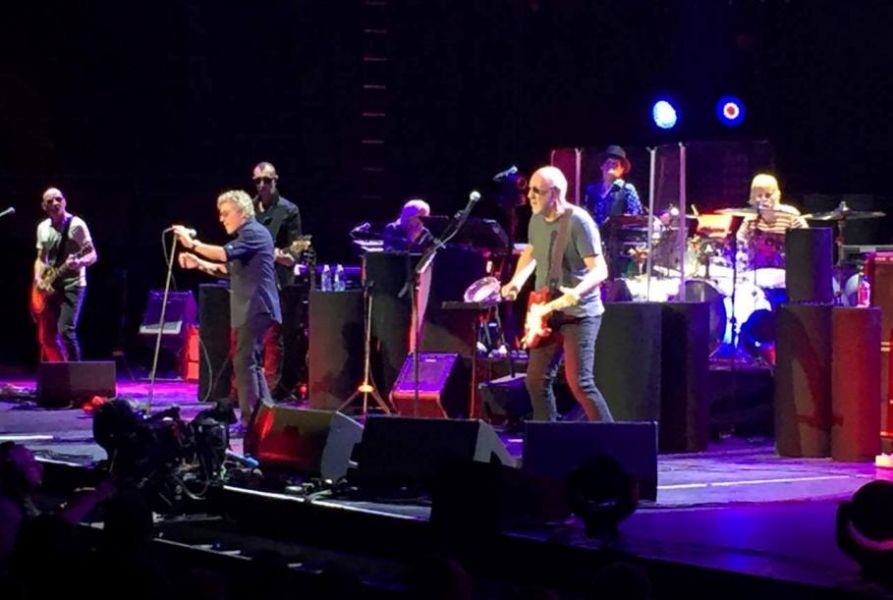 I first saw the Who at the Pontiac Silverdome on December 7, 1979. 13,231 nights later I saw them for the last time at Joe Louis Arena in Detroit. While it's sad to think I've been to my last Who concert, I can honestly say that they went out on top. The February 27,  2016 show was easily the best I've seen since the passing of John Entwistle, a decade and a half before.

Before the band took the stage, the video screen ran tributes to The Ox, Keith Moon, and had photos of the Who's long history in Detroit, focusing mostly on their gigs at the famous Grande Ballroom.

The lights dimmed at 8:45, and the band hit the ground running with Who Are You. I thought this was an excellent opener because everyone knows it, even the people who weren't born yet when it came out in 1978, because of the CSI franchise. Also, it's a good sing along, so it got the audience involved early on.

It was obvious from the start that they were not just going through the motions. Roger sounded fantastic (hopefully that continues as the tour rolls on) and Pete was, to use one of his terms, throwing fire. The windmills weren't as plentiful as in the past, and the leaps were even rarer, but the playing was outstanding.

The Seeker followed that, and then came The Kids are Alright, I Can See For Miles, and My Generation. Aside from the Tommy medley at the end, these were the only 60s songs of the night. After My Generation, Pete talked about the extended solo he'd just done and noted that it was nothing compared to what he would do in the old days at the Grande. He talked about how he would take herbal tea to boost his energy, and by the end of My Generation Keith Moon would be flailing his arms yelling "stop, Pete!"

The first Quadrophenia number of the night was next, The Real Me, which was a big hit with the crowd. Following that were a few Who's Next era tracks. The always popular Behind Blue Eyes, Bargain, and Join Together. Join Together is one of my favorite songs of all time, so I was quite happy that they dusted it off for this tour. It was the first time I'd heard it live since the 1989 tour, and they nailed it.

After a rousing You Better You Bet, Roger got a bit of a break as Pete took over the vocals for I'm One, followed by the instrumental The Rock, which was just outstanding. The video projections, which were great in the Quadrophenia 2012 tour, were updated to more current events including footage from 9/11.

Roger returned for the challenging Love, Reign O'er Me and even though it perhaps was not his best version, it was still top notch. Then he got another break as Pete sang a rousing Eminence Front. This was the first time all night that the entire capacity crowd was on its feet.

As the first chords of Amazing Journey started, I knew we were heading down the home stretch. The Tommy medley consisted of the usual Amazing Journey, Pinball Wizard, and See Me Feel Me. By the end, the crowd was whipped into such a frenzy that you'd think they couldn't get any more into it. But then came Baba O'Riley, and the place just erupted.

Then came the grand finale, Won't Get Fooled Again. Anyone who's been to enough Who concerts knows it just ain't over until Roger makes at least one flub. This night was close to breaking that rule, but then he flubbed the second verse of WGFA by coming in too early. The rest of the band kept going without missing a beat, literally, and Roger got back in the groove.

And then it was over. I seemed to be one of the few people who realized that they don't do encores anymore, which worked to my advantage because exiting the parking garage at Joe Louis is a legendary pain, but we were halfway back to the car before most people realized it was over.

I could not have been happier with the show. No, they didn't play everything I'd hoped, but they never do. But what they did play was over the top. I sincerely hope for the sake of everyone who has tickets to this tour that they can keep up the energy and power.

Pete can still Rock as hard as ever, that's for damn sure! Amazing to see him and Roger kick off the rest of their 50th anniversary tour in Detroit tonight. 40k venue sold out and everyone knows every word. This is what a musical artist should be all about; an example of soul and creativity in Rock & Roll that is sorely missed in today's cultural landscape. Hats off to these guys for their massive contribution to music. Long live The Who!

The Detroit show last night was wonderful. Roger sounds very strong although he seems to have a bit of a cold with increased coughing as the night progressed. Even so, his voice gained strength especially with his passionate Love Reign. Pete was on fire the entire night. This is the best that I have seen him the entire 50 hits tour. He seemed to be incredibly happy on stage and played with incredible enthusiasm and dexterity. Set list was similar to Wembley with the addition of Real Me from Quad. The Rock seems to be a permanent addition and is spectacular, with the video updated and even more powerful than during the Quad tour. Both Pete and Roger seemed to be enjoying themselves, laughing and joking the entire night. The Detroit fans were wonderful with many long ovations. Pictures attached are heavily Pete oriented as that how they turned out with the lighting. Wonderful first show in what is hopefully a 13 concert first leg to the 2016 tour.