The studio album of The Iron Man: The Musical by Pete Townshend was released 24 years ago on June 27, 1989. The musical project is based on a children's book written by Ted Hughes, and was later turned into a full blown stage production, which debuted at the Young Vic Theatre in London's West End in 1993.

To celebrate this landmark piece of work, we have put together a detailed history page for The Iron Man in the Musicals section of this site.  Lots of great stuff there, so please check it out! 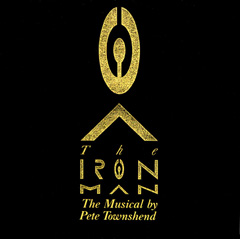