Pete is featured in the Lambert & Stamp documentary that was World premiered at the Sundance Film Festival on January 20. The documentary is also scheduled for the Sundance London Film and Music Festival on April 25. Tickets are on sale now at sundance-london.com/event/lambert-stamp. 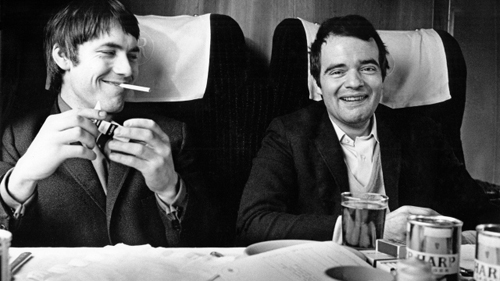 The documentary has been getting rave reviews from major entertainment publications and fans who were lucky enough to attend the screening. Here are a few reviews of the film.

Many thanks to Lauren from Boulder for writing the following fan review of the film and Q&A with James D. Cooper.

Top Line Review for Who Fans - Absolutely captivating.  Must see.

Top Line Review for General Public - Excellent film.  Recommended for anyone with an interest in rock and roll and/or British popular culture of the 60s.

Following are some stream of consciousness thoughts on the film...

There are extensive interviews with Chris (Stamp) and Pete (Townshend).  Lots with Barney (Richard Barnes).  A good amount with Roger (Daltrey).  Some bits with Heather (Daltrey), (Irish) Jack, actor Terrence Stamp (Chris' brother), and a couple of Kit's friends/acquaintances.

Pete looked great. It was nice to see him at ease and in a good space.  Energetically, it was kind of the antithesis of the interviews from Max R&B.

Also, there was a good chunk of interview footage with Roger and Pete TOGETHER!

During the Q&A, I asked the director (James) how they'd pulled off getting them together.  He didn't REALLY answer me, but he did say that it was helped by the fact that Chris was on the premises at the time.  The footage of Pete and Roger together was shot in 2005.

The bulk of the Pete footage is likely 2006 or 2007 (he references being 61).  Also, there is what looked to me like more recent Pete footage, as well. This film has been a long time in the making.

It was FASCINATING to see both Pete and Roger talk about some of the stuff in front of one another - a rare occurrence, I suspect.

Sadly, the film was very much like a Who concert film.  A ton of Roger and Pete, a splash of Keith, and but a whiff of John.  In this setting, while I missed John and Keith, with Kit and Chris being the focus of the film and
Roger and Pete being the two survivors, it didn't really bother me, so much as it saddened me.  But I can't help but wonder, is there really no footage out there of John and/or Keith talking about Kit and/or Chris?

Pretty much John's strongest presence in the film was a bit from Pete, "And we had John Entwistle, who was a genius. He was just a fucking genius on the bass guitar."  (That may not be the exact quote, but it's close.)  It brought me to the edge of tears.

There was all sorts of really interesting footage, both performance and interview.  I'd certainly seen a good amount of it over the years, both common and uncommon, but there's was a whole lot I hadn't seen, as well.

I was not particularly keen on a lot of the musical bits/soundtrack that JC chose to feature, but I reckon that's just a matter of personal taste.

I found it very interesting to hear about how Kit and Chris treated Pete, and secondarily Keith, as the chosen one(s), and how much Roger was essentially treated as a second class citizen.  (John?  John who?)  After it being his band, Roger was literally living in the back of the van or in the office, while Pete was living in the posh flat at 84 Eaton Street, with Kit and Chris.  I have tremendous admiration for Roger's ability to suck it up and persevere in service to his greater vision.

Speaking of the flat, Pete and Chris talked about the importance of the flat in the posh neighborhood as a part of their sketchy financial strategy.  Apparently, at that time, if you lived in the right neighborhood, you were extended credit from anywhere and everywhere, sometimes not even needing to pay your bills.

Two specific examples stuck with me. The first was how they opened an account at the Royal Bank of Scotland, were extended £4000 overdraft protection, proceeded to write checks against the credit amount, and then bail on the account. (I expect they had to pay it in the end, but in those days before computers, they actually ran some version of this scam, by going bank to bank.)

The other example concerned a local liquor store.  Pete opened an account there when he was 20.  While he doesn't drink anymore, he still brings wine to parties and such.  He'll occasionally go by there to pick up a few bottles. For over 40 years, HE HAS NEVER PAID HIS BILL!!!  He has offered in recent years, but they continue to just put it on his account.

It was very interesting to hear them talk about Roger being fired.  On the one hand, there wasn't anything I hadn't heard before, but it was still different to hear it firsthand.  Actually, the one thing that Roger called out that was news to me was how for the next few years, Keith would taunt him mercilessly, and he could never fight back.

The other bit that struck me from that time was Pete talking about overhearing a conversation that John and Keith were having.  They were speaking disparagingly of him (Pete), while discussing forming Led Zep with Jimmy Page.

I felt a sense of the hurt that both Pete and Roger carry from these memories.

Another fascinating bit was Roger and Pete talking about Keith having a serious depressive breakdown back in the 60s. For several weeks, he was just a basket case, breaking down in tears during rehearsals.  This was years before Neil's death and long before Kim left him.

Pete's talked about his own lack of compassion (at the time), juxtaposed with Roger's surprising ability to hold compassion and attempt to comfort Keith during these internal struggles.

Not that I'm in any position to make a mental health diagnosis, but I would be shocked if Keith wasn't struggling with (and self-medicating) bi-polar illness throughout his adult life.

I was captivated to see all of the B&W footage of both Kit and Chris.  I've been deeply curious about both of them for as long as I can remember.  I wish there had been even more old footage of Kit and Chris speaking.

And personally, I could have done with less general London youth footage and cultural explanations, but again, that was a filmmaker judgment call - to appeal to a wider audience, I suspect.

As a random side note, Kit was CONTINUALLY chain smoking. The joke was that he'd used one match in his entire life. He'd lit that first cigarette, and he'd been just relighting from cig to cig ever since.

On a related topic, it seems that it was not uncommon for Kit to start fires by falling asleep (passing out?) with a cigarette burning.

Another random side note - they showed interviews with Kit speaking flawless German AND French.  I'm always in awe of people who speak other languages fluently, especially when it's more than one.

Oddly, they barely mentioned the making of My Generation and said not a word about A Quick One or Sell Out.

It was interesting to hear them discuss the Tommy film and contributions to the development of the Tommy album/story. They did address it, but at the same time, I think they kind of skirted the surface of how deeply that began the rift between Pete and Kit.  I'm under the impression that this may be the origins of Kit's extended meltdown.

They never did address the Lifehouse/Tommy film debacle.

It was quite interesting to hear them speak of the Lifehouse recording sessions in NYC.

The film was a great reminder of just how dangerous it was to be "homosexual" in that time. (The 60s, really, much more than the 70s.)  I'm grateful that that reality is almost unfathomable to me.

It was interesting to learn of Kit's deep love for Venice.

They did squarely address the breakup/lawsuit.  Most interesting to me was learning that Keith would never ever agree to sign off.

Roger and John were the ones who had signed the legal complaint.  Pete eventually came around.  But Keith was doggedly loyal to Kit and Chris all the way down the line, serving as their staunchest defenders.

I have the sense that relationships between Kit and the band were never really repaired, but I'm under the definite impression that Chris and at least Pete and Roger rebuilt their relationships.  (Does anyone reading know about Chris and John?)

Just a few years ago (Dec. 2008), when Roger and Pete were celebrated at the Kennedy Center Honors, Roger insisted that Chris join them as the last of the survivors.

The footage of Roger/Heather, Pete/Rachel, and Chris/Calixte in their formal attire, just before leaving the hotel to go to the Kennedy Center Honors, was some of my favorite footage.  In spite of the formal attire, everyone appeared wonderfully at ease.

The other thing I asked during the Q&A was if Chris got to see a cut of the film before he died.  Sadly, he did not, but his wife and daughter were there at the screening, just a few rows behind me.

I was disappointed by the quality of a lot of the video.  I'm pretty sure the technology exists to dramatically improve a lot of it, but it may be that such processes are cost prohibitive.  I don't know a whole lot about film technology.

The film received a warm and enthusiastic response from the crowd.  I think it will be well received and enjoyed by anyone with any interest in that era and/or rock music.

And finally, a little thing that makes a HUGE difference in the experience - at the theater, they had the volume cranked up LOUD.

It's so surreal to have gone to Sundance and come back home in just over 24 hours.  I'm glad I did it.  It was totally, totally worth it.