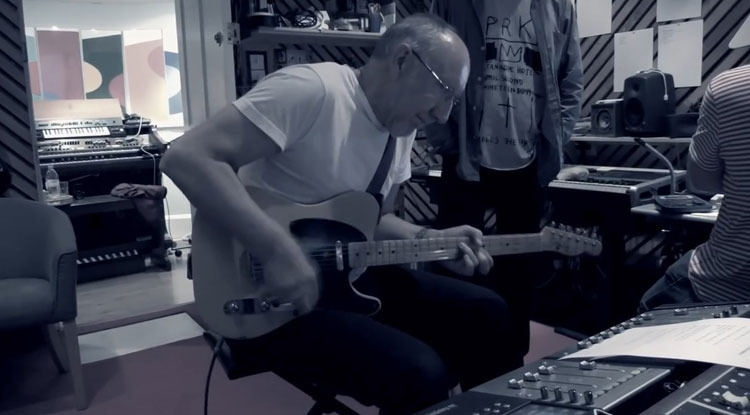 Here is a sneak peak at Travelator Part 2, the brand new song by Jean-Michel Jarre and Pete Townshend that is featured on Jarre’s new album Electronica 1: The Time Machine. The album was released in the UK and on iTunes and Spotify today, and will hit stores as an import in the US on October 23. Check it out!

The whole Electronica project sounds fabulous, so be sure to buy the album!

Here are links to purchase it in the UK and US. For more information, please visit jeanmicheljarre.com.

Jean-Michel describes working with Pete in an interview with Artist Direct: "When you take the idea of Pete Townshend, I mean you’d think, ‘Why Pete Townshend?’ Pete Townshend, he’s the guy who introduced electronic sounds and sequencers into rock music with songs such as “Baba O’Riley” and ‘Who’s Next.’ Also when I came to visit him in Richmond in the UK, I picked three different demos and we discussed a lot of things. We spent half a day in his kitchen drinking tea and talking about different things.  Then, I played him the three demos that I had in mind. That’s always something difficult when you don’t know how the other person will respond. He immediately says, “I really love these three pieces. Why not do a mini electronica? I would be your lyricist in this and I will sing on it and I will play the guitar if you want.” And that was done in principle and we started from that. It pushed the track so far away by giving me so much. We were in the studio together and he was like a kid in his very earliest approach to music remains exactly the same. It was like he was a teenager."

A 3-part EP for Travelator will be released in December.

Jean-Michel Jarre tells us all about Electronica 1: The Time Machine in this new EPK video. There is a nice scene of Pete recording a guitar track about 7 minutes in!