There is a new exhibition of the work of late visionary artist Donald Pass on display at the American Visionary Art Museum in Baltimore through February 22, 2015. The show feature’s the artist’s incredible ethereal spirit paintings, and includes quotes from Pete Townshend and other admirers of his work posted among the artwork.

According to the Baltimore Guide, Pete Townshend said:

“It gives me faith that the acceptance of unsolicited faith through artistic function can—apparently—come with so few fundamentalist strings attached.”

For more information on the exhibition, please visit the AVAM website.

Pete has also written a lovely tribute about the artist for the Donald Pass website.

"Donald Pass has been an inspiration to me. He is an artist who had a vision that caused an artistic epiphany. Donald’s function as an artist changed. He has witnessed the evidence of an ethereal world. This gives me courage to follow my own visions which are usually musical of course. Musicians commonly hear things that they can’t explain, and they may spend their entire lives trying to make such music tangible. So it isn’t just Donald’s paintings that matter – and they do matter because they are often so beautiful and sometimes so frightening – but also his acceptance as an artist that what happens to us changes us, and redirects us. Life happens. It isn’t always necessary to fight it. Donald had a vision and accepted the consequences. He didn’t pretend to be normal, nor did he pretend that what he had seen had never happened. His wife completely accepted the event too, and this I believe is what helped Donald to remain sane. The two of them seem to accept this almost apocalyptic transformation from a normal painter to one of an artist of mystical function. They accepted Donald’s transmogrification with the every day equanimity of the two grounded people they are. It gives me faith that the acceptance of unsolicited faith through artistic function can –apparently – come with so few fundamentalist strings attached. We are tempted in this absurd day and age to deny absolutely all that is metaphysical, spiritual or mystical. Donald and his wife and circle demonstrate that such absolutes are probably unnecessary." 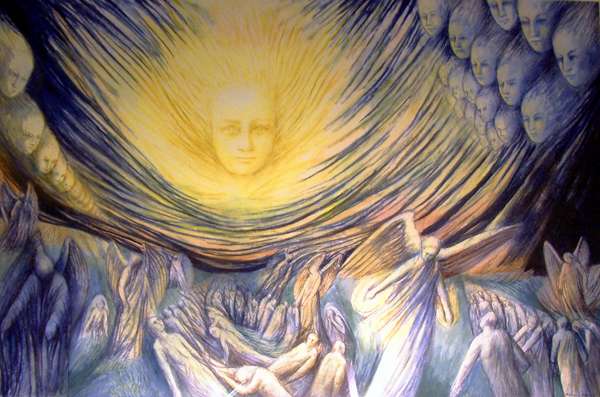