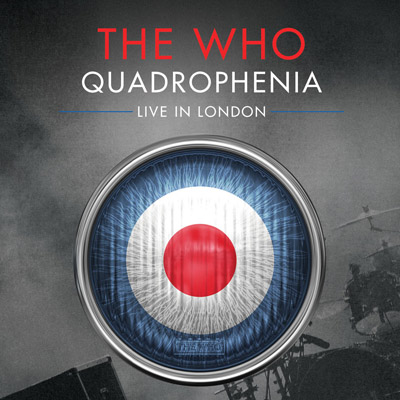 The Who completed their critically acclaimed tour of Quadrophenia on July 8, 2013 at the Wembley Arena with a benefit show to support the Double O charity. This concert is billed as “Quadrophenia: Live in London” and hits the stores this week in multiple video and audio formats, with various packaging that should make Who collectors very happy. A preview showing of the concert was also aired on AXS TV in the US on June 8.

The concert was beautifully filmed, featuring mostly close-ups of Pete Townshend and Roger Daltrey, which draw you into the stage performance and provides an intimate viewing experience. The interplay with Pete and Roger is a joy to watch, as two old friends clearly love sharing the stage with one another, now 50 years on. They both looked gorgeous and performed magnificently, and appeared to be just hitting their peak on the last day of the tour that could have continued on many more months.

The interaction between Pete and his brother Simon performing all the way across the stage is captured with excellent camera angles that pulls the two brothers close together, showing their loving relationship and skills at intermingling the guitar parts of this very complex masterpiece. Simon also did an outstanding job taking the lead on Dirty Jobs.

The onstage film visuals were effectively interspersed as full screen videos and also blended in with close-up shots of the musicians to help tell the story of Quadrophenia without the need for a narrator. They were tastefully done, adding a lot to the performance without becoming overly intrusive or pulling you away from the action on the stage. By featuring the main performers and visuals, rather than using a lot of fast moving flashy camera angles and distance shots that plague too many recent concert films, the focus remains purely on the music and story of Quadrophenia.

The audio recording of this show is superb, and the sound quality is top notch. There is so much going on in this production, with all the various instruments and sound effects that were meticulously recreated from the original studio album. They did a fantastic job of capturing all of this, and the clarity and separation of all the audio elements are stunning.

Overall, this is an excellent production of one of the greatest works of music of all time, and is a must have for any fan of Pete’s music!

For details of this release, please visit The Who website.

For reviews, photos, and videos of all the shows from the Quadrophenia tour, please visit our concert pages at http://petetownshend.net/gigography/quad-tour