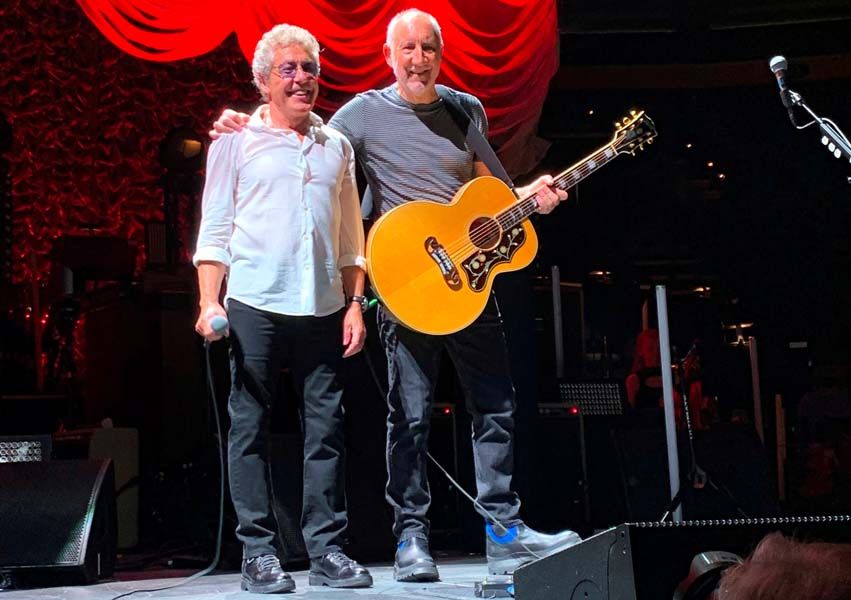 Top line summary:
As I predicted months ago, Grand Rapids (#1) was dress rehearsal. #2, Buffalo was orders of magnitude better. And I have little doubt, that also as I predicted, that they will fully kick into gear over the next two in Bristow (DC) and at MSG.

Sound:
This was the biggest game changer of all. The SOUND was night and fucking day. In Grand Rapids, Zak and the electric guitars were virtually inaudible from the front row. We could SEE them. We couldn't HEAR them. Hell, in Grand Rapids, I repeatedly removed my ear plugs. In Buffalo, the roar of the mighty Who was back. And it made all the difference.

Personally, I would prefer a little more Zak and a little more Jon. And I'd also like a little more orchestra, as they were drowned out a bit, by the new mix. Unlike some, I LIKE the orchestral Who music. But if I have to pick between the two, I will pick Who2, every single time.

Pete:
The damn suit jacket was gone! I cheer him on in wearing whatever he damn well pleases when he's not on stage, but I hate the suit jacket on stage. It's always in his way. It its place was a striped, short sleeve shirt.

More importantly, he was in a great frame of mind. Both of them were SO MUCH MORE RELAXED and at ease. He smiled. He laughed. He and Roger chatted and joked. He even interacted, a bit, with us and the rest of the audience. And there were windmills. Many, many, many windmills. And I missed them, but apparently, according to Eddie and Duke, there were a pair of half assed jumps. One at the end of Tommy. One at the end of Baba.

Critiquing his performance - not an amazing night, but no complaints. B+

The only other particular Pete thing I can think of to mention is that while he is using a music stand (which might have his iPad on it, rather than his binder, now that I think about it), he's got it set up down low, and tilted flatter, so that it's hardly a visual obstruction factor. Thank you, Pete. It sucks when it's blocking our view.

Roger:
Also in a good frame of mind. Clearly less stressed than in GR. Also had a fashion change. Gone was the opening night t-shirt, replaced with black jeans and a white dress shirt. Apparently, Roger dressing up and Pete dressing down is the winning combination.

Overall, he sounded great again. Similarly, a solid B+.

After Tommy, Pete thoughtfully made mention Roger's upcoming orchestral Tommy release. Pete explained that he didn't join the tour because he was busy writing songs for a new Who album. (!!!)

He talked about how pleased he was that Roger actually liked the songs.

Roger talked about how in order to sing words that somebody else has written, he needs to find a way inside of Pete's songs, inside of Pete, at which point there was some fun innuendo. I hope someone caught video of the interaction. Not all-time priceless, but I sure would like to see it again.

Setlist/Performances:
The setlist was largely the same, with a few minor tweaks. They dropped Acid Queen during the Tommy set. While I like it, I did not particularly miss it.

During the "band set," they added in Substitute, which I like well enough, but does not excite me. So Sad About Us would excite me. And if we want to stay with comfortable and predictable, I'd pick Can't Explain over Substitute, EVERY SINGLE TIME. I wish they'd open the band set with it. It would restore order to my Who universe. And then, if they want to follow with Kids, that would be fine.

The other change in the band set was that WGFA was JUST Roger and Pete (on AG). The show before, it had been Roger, Pete (on AG), Simon (on AG) and Zak. (No Jon.). I don't have strong feelings either way, but in my post show survey, the consensus was in favor of just the two of them. It was highly interactive. And Roger turned it into quite the singalong (or sing-song, in Britspeak). Oddly, he'd have the crowd sing sort of random, verse lines, but with such a warhorse, it came off really well, and to their/our credit, we sounded great! R AGAIN complimented the crowd on our vocals, at the very end of the show.

Then in the Quad set, they added in The Real Me to start the set, which was a GREAT addition. DEFINITELY added more to the Quad set than dropping Acid Queen detracted from the Tommy set.

Again, I thought Punk was BY FAR the best song of the night. My only quibble is that there was one part, both nights, where Pete wanders away from the mic and misses his response lines. Simon is singing, but as much as I love Simon, Simon is NOT Pete. I so love hearing this song without Gary Glitter or PJ Proby mucking it up. Roger AND Pete, singing so many great lines + it is what's left of The Who in their full, explosive glory (and in this case, with the addition of the orchestra). Most definitely one of my happiest places on earth.

AND/BUT I can see that going right from Punk into 5.15 is pushing up against too much for Roger. I think they should flip Drowned and 5.15, which would make it so that Roger has a break every other song during the Quad set.

Again, he couldn't fully hit the end of Love, but again, he was in good spirits about it.

Other misc song/performance comments...
During the opener - Overture / It's a Boy, the band and orchestra were horribly out of sync, for quite a while. The band was playing well within their unit. The orchestra was playing well within their unit. But they were TOTALLY out of sync with one another. I don't know what the sound was like where they were, but that was absolutely the case where I was. And it lasted for a while, but once that was sorted, they played really well with one another, throughout the rest of the night.

Imagine A Man was beautiful again, but again, Roger flubbed lyrics. But this time, right near the end, he got totally lost. And with a full rock band AND an orchestra, it could have been a disaster, but amazingly, it was not. BOTH the band and the orchestra totally rolled with it and held it together. I was mightily impressed.

Tea and Theater was beautiful, again. It feels really fitting in this setting. But it seems weird for Roger to sing it (both nights) without a cuppa tea!

Who Are You and Join Together, both of which were weak performances in GR were significantly better in Buffalo. In GR, Roger was totally restrained and didn't fully engage the crowd. These songs in Buffalo they were much more engaged and interactive. Neither one knocked my socks off, but both were vastly improved.

Eminence Front note. It's not that either Grand Rapids or Buffalo were particularly exceptional performances, but I really, really like the way the orchestra draws out so many of the song's compositional qualities.

Baba was again quite wonderful with the orchestra. It (obviously) lacks the full punch of the band only version, but as I said before, I like it. Katie was fab, again. But Roger, instead of awkwardly (and adorably) remaining center stage with Katie, as he did in GR when she took over, stepped back to where he plays the harmonica during Drowned.

The second show of the tour was structured similarly to the first one (Grand Rapids, MI) with a three-part presentation. Full disclosure...I did not attend Grand Rapids; any reference to that show is taken from other accounts.

The show opened with essentially the same song cycle as in Grand Rapids. Fortunately, they dropped Acid Queen. The band and orchestra were wildly out of sync for the first few songs - Zak seemed to be way too fast, almost manic.

Pete initially just looked lost trying to match either competing rhythm without much success. He pulled into gear, basically taking control of the beat during the jam at the tail end of Amazing Journey and into Sparks.

Sound balance was still a problem with the orchestra relatively much louder than Roger's vocals and rest of the band. Couldn't really hear Jon, Loren, and at times Pete. Simon carried much of the intricate solo work and was a bit higher in the mix. Pinball Wizard and the See Me Feel Me finale were well received as expected, the later being gloriously enhanced by the orchestra. It was surprising to hear that they returned to using the There's A Doctor riff (always used to close the live versions of See Me Feel Me until the 1982 tour) and then transitioning into a coda with the ending used in the Tommy movie (and used to close See Me since 1982, except Roger's solo shows).

Who Are You received a very light orchestral treatment but still sounded neutered. Much has been made by others about the inclusion of Imagine A Man in the set; it sounded magnificent. However, this choice of a new-performance song just seemed to further distance this tour approach from the traditional aggressive and uncomfortable tour formats that The Who are best known for. Eminence Front was great (and I never say that)! Join Together didn't work with the orchestra; kitschy Springsteen sing-along was a dud too.

You could finally hear the individual band members; all in sync too! Great to see Substitute played. Just Roger and Pete performing Won't Get Fooled Again...Pete's playing very reminiscent of his 1979 performance at Secret Policeman's Ball. Nice work. I missed the typical show closer version though.

The Quad set was well done. The heavier musical style and more symphonic song structures worked well. Of course, opening with thundering The Real Me really set up the final part brilliantly. The Rock was outstanding and Love Reign O'er Me was great. It seems there may have been a bit of vocal viagra in a couple of spots... okay by me if it helps the overall performance. Baba was spectacular as always...enhanced by Katie Jacoby's soloing.

While interesting in concept, I found that the song selection and execution fell below my expectations. I enjoyed it, but felt that the orchestrated experience was more labourious than augmented.

The band, and especially Pete, seemed to really struggle with having to work with the orchestra. The tour concept is premised on the orchestra accompanying the band. However, for much of the show it seemed to be the band trying to accompany the orchestra...and its scripted performance. There was no avenue for the band to boogie on its own, except during Part 2.

Two questions:
1. Is it necessary to have the long blocks of orchestrated songs, rather than interspersed with band only songs?

2. Can a more up-tempo beginning be considered...Tommy is much too soft to start. Maybe something from Who's Next, I Can See For Miles, or other high-energy songs?

I admire the initiative to try something different. I'd like to see the band take more of the lead and be heard, without fighting for sonic space or control.