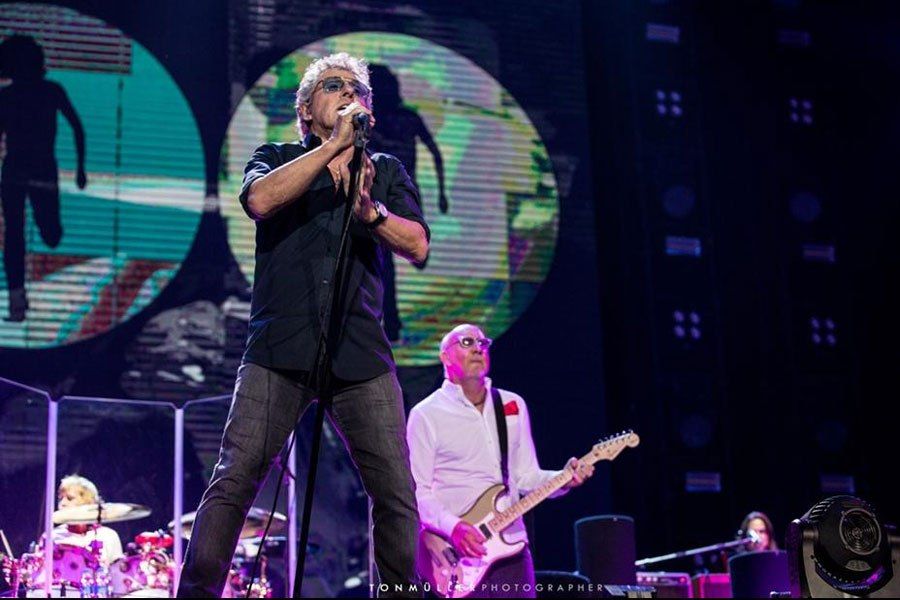 They came, they saw, and they conquered.

I know that people who are reading this might have attended dozens or hundreds of The Who concerts from the ‘60s onwards, so this is a review by a newcomer. Although I'm a big Who fan, I had never had the opportunity to see them live before, and after 20+ years attending many concerts of various rock 'n' roll acts, I thought I was ready and very prepared for last Tuesday’s experience. And how wrong I was, terribly wrong to say the least!

It was not just a concert, it was a celebration. A concert that will be cherished and regarded from now on as one of the finest, a concert that any fan would have wanted to attend. It was a big gathering of friends who grew up together listening to their music to death and knew by heart EVERY SINGLE SONG they played that night. From now on, there’s a before “The Who” and “after The Who” thing for Porto Alegre fans.

To put things in perspective, when Bill Curbishley said, on a BBC interview, that there were plans for South America this year, a huge excitement amongst the fans was instantly built. Then the news that The Who was coming became official, and it was like “the” big news. It was the concert everybody was dreaming of, and it was coming true - especially because most of us had never had the chance to see them live before.

Then finally came the great day, and everyone around the stadium could feel amazing vibes coming. I saw many friends meeting up, I saw a lot of 12-year-old (or so) kids with their parents who clearly were passing on the passion to them. There's this nice meeting place at the stadium, with bars and food trucks, and The Who songs were blasting out of the speakers, so everybody was having a great time.

People were in awe just by reading “The Who” written on their gear cases. I saw people crying just by seeing Roger swinging his microphone around, like he did on those old videos we used to watch. People were speechless when Pete did his legendary windmills. Not only did I see, but I actually experienced all of those feelings myself – because that’s the natural reaction of any music fan, no matter what act we're talking about.

Now let's talk about the set. “I Can't Explain” was perfect, a great opening song, and the crowd was thrilled to listen to this one. “The Seeker” was also very well-received. During “Who are You”, the crowd was screaming the “who, who, who, who” chorus at the band, and then came “The Kids are Alright", which is one of my favorites, with Roger in top form. Before playing “I Can See For Miles”, Pete joked telling us that he couldn't see anybody who was even born when the song was released. Then a 60-year-old man popped up on a friend’s shoulders, Pete took notice and said, pointing at him: “There's at least one!”

The bond between band and crowd was created the minute they took the stage, but at this point they owned us. I wonder if that was the same man who approached a friend of mine at the end of the concert saying: “I want to hug you and thank you for your excitement. I saw them at Wembley in 1976 and I'd never thought that they would play here just as powerfully as they played then”.

If it's impossible for me to point out “the” highlight of the concert, as there were plenty – what can I say about the “Quadrophenia” songs? It was glorious listening to them live and being able to watch Pete do his solo set –, it's very easy to say which song was the only one that wasn't much appreciated: the general feeling was that “Eminence Front” could have been replaced by “Squeeze Box” or “Long Live Rock” or any other song whatsoever. Play a 45” B-side, the crowd will know it.

Now let me talk about the “Tommy” songs. Sometimes, “Who's Next” is my favorite album – I was very lucky to meet Pete in Porto Alegre, and he signed my copy –, but overall “Tommy” rules, at least for me. So when they played the first notes of “Amazing Journey”, I felt a whole lot of emotions. To say that “Tommy” is one of the soundtracks of my life is an understatement. This is a F#$%*IN' hell of a masterpiece, period.

And what can I say about “Sparks”? I was in complete awe and couldn't believe my eyes and ears. I can't remember how many times I've listened to this album – alone or with some friends –, but this time The Who was playing it live and right in front of me. Sorry, Pete and Roger, but I'll never listen to this album the same way again after this concert.

Carrying on, there were some minor mistakes and technical issues that didn't affect the concert at all – actually it only summed up to the whole experience and reminded us that they are humans like everybody else (on a different level, of course, but you get my point). When Pete kicked off “Pinball Wizard”, his guitar was out of tune, so he started tuning it, then switched guitars and everything went perfect from this point on. During the last bit of “Listening to You”, the “Baba O'Riley” intro could be heard before time, but really subtle, and probably not many people took notice.

You can see when the band is enjoying the concert just as much as the crowd, but this time it was something else – you could almost touch it in the air. When Roger introduced Pete during the band intros, Pete hugged him and kissed him on the forehead. I saw it and I saw how the crowd reacted to it. Another priceless moment for all of us.

After an epic – I don't like this word, I think it's overused, but it fits perfectly here – “Won't Get Fooled Again”, with Roger leading the crowd and pointing his microphone at us, as we sang out loud, the whole band but Roger left the stage. He was still with us and said: "Y'all know this is BS, don't you? Come back here, guys!" – and the whole band came back to play “5:15”, followed by “Substitute”. Punch after punch from the beginning, we're all knocked out – but stoked. What took you so long, guys?

At the end of the concert, people were completely speechless. They couldn't believe what had just happened and what they’d witnessed. I saw lots of people crying and hugging each other in a way I'd rarely seen before.

I'm actually weeping as I write these lines.

The souvenirs from this amazing journey, things I'll carry with me forever, are my “Who's Next” signed by Pete, the setlist from the concert, which I’m gonna frame along with my ticket, and especially all the friends, old and new, I've met because of this concert. This is already one of my most treasured concerts; a perfect and priceless night that will be cherished and remembered many years from now, for as long as I live.

The South American fans' reaction appears to be increasing by the minute, like a crescendo. São Paulo and Rio were great, Porto Alegre was awesome, and Santiago and La Plata will be unforgettable.

The Who is amazing, but I guess you all already know that. Go see them while you can!

Porto Alegre is a very important city of Brazil’s South. The rock’n’roll shows there are usually wild and the audience is a dream for the entertainers in rock music, especially the classic ones.

The third and (unfortunately) last The Who’s gigs in Brazil was amazing, just as the previous two at São Paulo and Rio de Janeiro (for more information, please read Luciano Teles’ review).  Beira Rio Stadium just have received one of the most waited and later one of the best shows in Brazilian’s Region South in history.

The rock party started on 7:35 PM (local time) with Def Leppard’s show. Far different from their show in Rock in Rio, the band was more relaxed and very comfortable with the crowd and gave to 14,000 rock’n’rollers a very powerful performance, with a handful of hits and they showed why they are one of the great names of NWBHM till these days.

After the Leppard’s geek, while the crew was preparing the stage for the moment everybody was waiting for, the speakers were giving the audience several songs by artists who were heavily influenced by The Who (Yes, The Sweet, The Clash, Deep Purple, Led Zeppelin, and many others). The stadium was crowded when Zeppelin song “When the Levee breaks” finished and a slide saying in Portuguese “MANTENHA A CALMA! AÍ VEM THE WHO!”. Lights out and – as Sally Simpson’s song – The Crowd went crazy!!!

The band entered the stage 9:25 PM sharp with a smiley Daltrey (who was very focused in the first two Brazilian gigs, especially the first one at Sao Paulo) and a very pleased Townshend, visibly amazed with the loud standing ovation for the Who, one of the most beloved bands for people from the South of Brazil.

The setlist was the same they played on September 21th in Sao Paulo, but the band was much more relaxed than the other show, with the crowd going berserk when the 1960’s hits were played at the first part of the gig.

Before playing “I Can See For Miles”, Pete joked about going old and the audience’s youth, pointing at an older fella and saying to him “you were born before 1967”.  But the funniest part of the show was Roger announcing one the most popular The Who songs in Brazil, “Behind Blue Eyes” as “This is not a Limp Bizkit song”, which made the hardcore fans laugh out loud for some seconds.

The crowd sang along with the band for the first of the three Quadrophenia songs, being later shocked for a brutal performance of the instrumental “The Rock”, and went almost to tears when Roger start singing “Love, Reign O’er Me”. Pete was quite surprised by the love of the audience of this material and gave a blasting performance, and then gave an incredible performance of Eminence Front right after.

Tommy songs were played with a heavier catch, especially by Zak Starkey, who was saluted by the audience whenever he made some of the gimmicks learned from Keith Moon.  Sparks was played with power, just as Pinball Wizard and the crowd fell into tears when “See me, feel me” was played with such a passion that is not found in nowadays bands.

But the best part was reserved for the end of the first act. Baba O’Riley and Won’t get fooled again (with Pete repeating the now infamous ‘power slide’ from Tennacious D) were sung along by all 14 thousand happy ones, who gave to the band a very beautiful and improvised choir.

They played a non-stop set in the first part of the show, and gave an outstanding encore with 5:15 and Substitute. Roger refused to leave the stage and the band finished the show very happy, with Pete and Roger thanking the Brazilian fans for the great shows they performed here.

Before the end of the gig, Roger talked about the “sabbatical” and how getting old is, giving the impression of an announced retirement. Hope I am wrong on this one, but if they were retiring, it will be at their peak of rock’n’roll heroes.

Thanks for your music, The Who. Brazil, at last, found out the greatest rock band and their performances will not be forgotten!