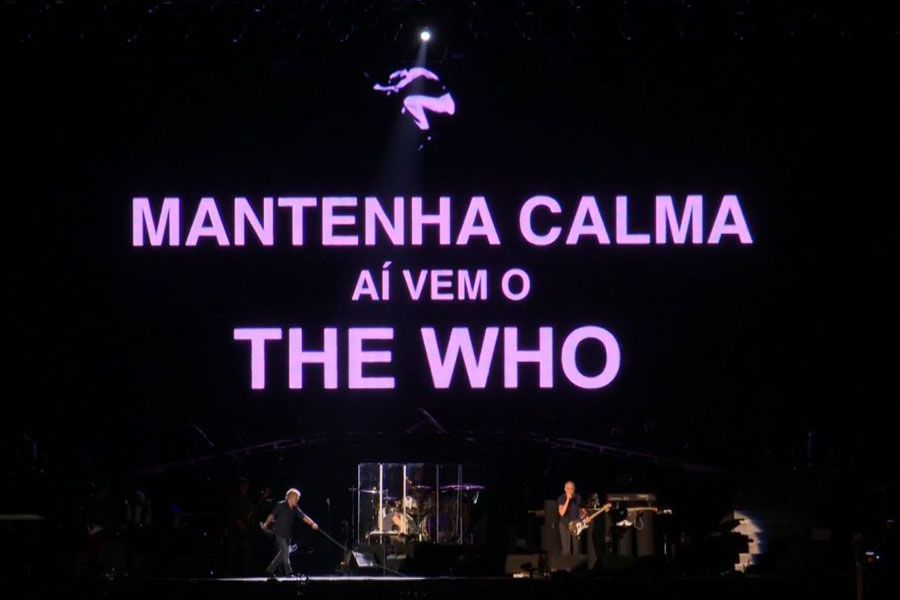 THE WHO at Rock In Rio, Parque Olímpico – Rio de Janeiro

The band presented one of the best shows in the history of Rock in Rio Festival. There had been seven Brazilian editions so far. They also have promoted RiR in Portugal, Spain and USA. The current touring band is more than Ok. Very talented musicians, who have found their best way to contribute to the sound of the band. Some different arrangements make us notice that.

They started with “I Can´t Explain” and we could finally hear Pete´s guitar sounds like a thunder live, heavier and louder than ever! When Roger sang the first verse, we made sure our dream came true. Even if many fans in the audience had attended Who concerts in other countries, seeing the band in Brazil was something completely new. Still, you can hear a Who live album from the best sound system speakers. Nothing compares to how loud they play live. “Substitute” came next in the sequence – just like the band used to do in the ‘70s. Pretty good!

The first chords of “Who Are You” made the crowd shout very loud, as much as during the chorus. Even those ones who were there to see Guns and Roses have surrendered to the power of this song. Before “The Kids Are Alright” Pete said: “This is a song for you! The Kids Are Alright” (Yes, they are!). It´s incredible how heavy this song became with the way Pete plays guitar nowadays, at the same time of how gentle Roger sings it. He seems to treat the song with a special care.

“I Can See For Miles!!!”, Roger announced. What can I say? One of their best songs was finally back on the setlist. They had already played it in Sao Paulo, two days earlier. We were not sure if they would do it again. But they did. I don´t know how many people already knew this song. But it really called people´s attention. Particularly, as a very, very amateur guitar player, it was so good to see how Pete, Roger and Simon worked in fine harmony on this song!! In the middle of it, Pete shouted: “I can see you!” Yeah!

“It´s great to be here, at Rock in Rio! Thank you for coming! You´ll go home in pieces! Some of you were not even born when this song was written”, said Pete before “My Generation” – with “Cry If You Want” snippet.  Few bands in the world can sing a song as timeless as this one. Mainly because few ones have the same attitude as The Who members. After this song, a Pete joked about some people in the audience yelling “Magic Bus”: “People keep… eh… Magic Bus… Magic Bus… Magic Bus… Ok, We´re gonna play something else. This is my favorite, my best song on Who´s Next album. It´s called Bargain!” Despite some people next to me had a doubt if Roger could sing this song, because of the highest notes, he did it without any problem. By the way, Roger sings so good nowadays!!

“Behind Blue Eyes” is one of the most known of the Who´s songs in Brazil. And people really sang it together with the band. As much as they did during the chorus of “Join Together”. What a song to be played live! The audience really loved it! Soon after, Pete pointed his finger on himself and said to the crowd: “I can dance. You can´t”. He was playing joke on the fact that he, 72 years old, was still able to dance from side to side, at the same time the people on the audience were strongly tight against each other (who had doubts about The Who filling a place, really?) “You Better You Bet”, another Who´s hit over here, had its chorus strongly sung by the crowd. Very cool. And Pete played some special parts on this song.

Next in the sequence, Pete picked up his acoustic guitar and announced, while he improvised some chords on it: “We're gonna do four songs, three songs from Quadrophenia” (You surely can play the entire album, Pete eheh). And started playing “I´m One”. But soon stopped it, due to a mistake (really!?). “Start it again”. And he finally played the song. In the Quadrophenia sequence we had “5:15” and “Love Reign O´er Me”. We have highlight Pete´s solo in “5:15”. As he used to do, some new licks and guitar phrasing have surprised the ones who have paid a bit more attention to his playing. Fantastic!! “Love Reign O´er Me” came directly, with the beautiful piano part before it. It made me shiver when the audience noticed that this was the song to be played and started yelling. Ok: It has brought me into tears. Again, Pete´s solo was much more than perfect. And Roger reached the highest notes as if he was singing this song for the first time! He really did not save vocal cords for the next song, for the next day, for the next concert. In the end, he kept improvising from highest to lowest notes. Which made Pete point his finger on him, with a grateful smile on his face. Tears again. Pure history in front of me! Live!

Without any speaking, four songs from Tommy: “Amazing Journey” (ours?), “Sparks” (yes, we had them coming from stage!), “Pinball Wizard” and “See Me, Feel Me”. How amazing it was to see the crowd singing it with such excitement, line by line, time after time until we all get into a kind of ecstasy!! I think we could keep ourselves singing until now!

The first synth lines for “Baba O´Riley” brought the house down! People started yelling, screaming and shouting! Pete started dancing in the intro, as he usually does. As well as in the non-guitar parts. In the end, another of Roger´s demonstration of how good he is on the harmonica. It was funny when he was ready to finish the song, with his traditional final phrasing, Pete turned his back on him and played the guitar a bit more. Roger kept himself playing looking at Pete, waiting for a signal to go the end. Pete gave him a chord and finally ended the song with a small but significant jump.

“Won´t Get Fooled Again” just showed how strong The Who´s songs are in Brazil. People really enjoyed the song and went crazy with Roger´s final scream. In the end, Roger and Pete said some things to the crowd, with smile on their faces, as a demonstration of how satisfied they were. They then saluted the Guns and Roses, scheduled to close the night. Much had been said about The Who “opening” for Guns and Roses. I was one of these people. But we have to be positive. Many of those who attended the Rock in Rio on that night to see GnR ended up knowing more about The Who. They are bands of different generations, each one with its own style, its own path in music etc. But they both have their names nailed in rock and roll history – and I´m not comparing the bands each other. Still, the guys in GnR really love The Who. So we should put this point aside and just enjoy the music.

But one thing must to be said: The Who are a very special band. And had definitely put GnR in trouble. Because they had to give much more than their best to play a concert better than the one that our heroes did. The house was already down. History was written again. And I hope they keep on writing it. Pete´s slide in the end of WGFA, longer than usual, by the way, has still a long road to go on. And we will be here, waiting for them.

We will never die, neither will The Who. Because neither us nor the band will ever get old.