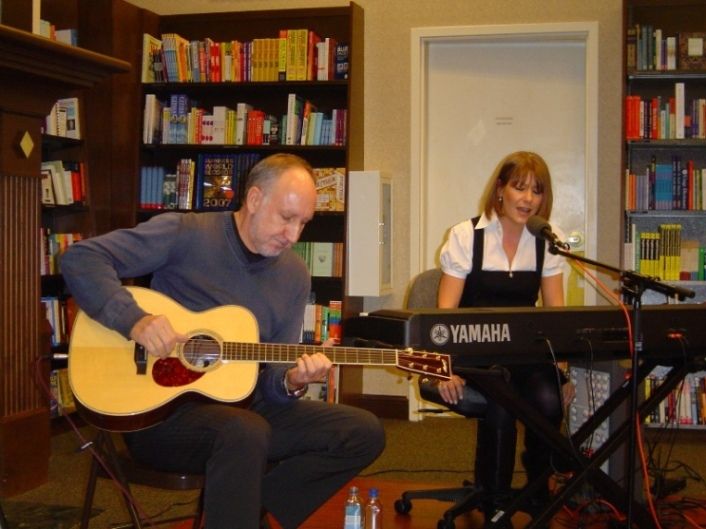 We made it to Rachel's Barnes and Noble gig, after arriving home a couple hours earlier from Portland, and having to commute in Seattle's horrible rush hour traffic on the way to the U District across Lake Washington from our home in Bellevue.  Still, we managed to get there an hour early, and got to chat with Rachel for a while as she waited for the crowd to arrive.

She was a bit worried that she wouldn't get a big crowd, but I assured her she would.  As it turns out, over 100 people must have shown up, which I'm sure was the largest crowd of the B&N gigs.  Pete and Rachel were on The Mountain radio station earlier that day, so that was good promotion for the show.  I have always thought Rachel's music would fit in well with The Mountain's format, so hopefully they will add one of her songs to their rotation.

A few minutes before showtime, Rachel grabbed me and we went outside for a smoke.  It was nice having a chance to chat with her and her assistant Carrie, and after a few minutes Eddie Vedder and his wife pulled up, so I got to meet them as well!

Rachel gave a very good performance of 4 songs from her latest EP, Shine.  Her set up was very simple, just an amplified keyboard, and an empty chair next to her.  Pete was hidden away for the first song, as she played a stunning version of Cigarettes and Housework.

Pete came out with his acoustic guitar and plugged in next to Rachel.  Together they played the composition they co-wrote, Just Breathe.  This song is probably my favorite of hers, and it was so wonderful to finally get to see it performed live!  After that, Pete moved to the back of the audience as Rachel performed her last 2 songs, Imperfection and Shine.  She did a great job with all the songs, and I only wish that she had time to play a few more.

After the performance, both Rachel and Pete spent a lot of time chatting with fans and giving autographs.  I can tell that everyone had as great a time as I did.  Thank you for a great show Rachel!  If you have not done so, I highly recommend that everyone buy Rachel's CDs that are available from Barnes and Noble today!

The preparation for the B&N gig started in Portland. After wandering around the west side of Portland for a half hour looking for breakfast, we wound up at Joes Cellar and Cafe. I'm not sure what happens in the Cellar, but we had a great time having breakfast, in part due to the classic wait staff of Diana and Nancy. At one point Nancy told me that abuse here wasn't reported, it was graded. So after Tea and Theatre at Joe's, we pointed the car in the direction of Seattle and we were off. Somewhere around 4:00 we rolled up near the Space Needle and started looking for a hotel. This was not to be an easy quest with the triple play of The Who on Wednesday, Roger Waters on Thursday, and Bob Dylan on Friday. After searching the internet for an hour, we tried the old fashion way, and walked into the lobby of the Quality Inn and Suites and snatched the last suite. It had a large deck with a killer view of the Needle!

I unpacked the Who alter, including Pete's pick from MSG (a gift from Russell and Tony from England,) the glass I used to clink with Mr. Daltrey at the bar in salute of the Vancouver show (yes, I took the glass,)  Zak's well worn and slightly cracked stick from the show the night before in Portland (tossed to me by his drum tech,) two ITA photo mouse pads, and I also added the retail Who mug I purchased for Trrish, only because of the history of filling it with water and toasting all of Portland, out the car window after the show.  After that, I slipped on my custom made ITA tee shirt, made with a photo of the ITA gang in caricature, photographed from The ITA bus at Leeds Uni (sent to me by Paul in Holland) back side of the shirt was a zoom of same photo, including only Rachel and Mikey, and "Rock The Fuck On!" written in UJ font at the top. I was ready for the party dressed to kill!

It was now getting late, and we were in hustle mode, unfortunately the Seattle traffic was not. It seemed like it took a week to cover the few miles to B&N, but eventually we made it. Walked through the door and was greeted by a wonderful sign announcing Rachel's appearance. Made our way to the second floor and found the cordoned off area where it was going to happen. There was a good crowd already there waiting for them to drop the rope in order to get a seat in one of the five rows set up. I was able to grab a seat in the second row, but with a slight adjustment, it became front row (I know, it's a sickness,) but there I was, and noticed a woman's bag, a cup of coffee, and a guitar case, all sitting comfortably on the table, stage left. A B&N representative made his way out and read a prepared statement about Rachel, her music, and her involvement in the ITA miracle (miracle is my reference not his.) He then announced Rachel to a very excited round of applause.

Rachel was looking beautiful in black and white, and her hair looking adorable. She welcomed the crowd and noted how happy she was to see so many of us there. She then mentioned there were probably some us wondering whether or not she brought her "old man" with her. To which she answered, "Maybe I did, and maybe I didn't."  It wasn't long until we found out. Rachel introduced Pete, and he joined her for the second song, Just Breathe. It was a fantastic version, and very surreal in the surroundings of a book store. Rachel joked about him having to go do something with that other thing he does,  but added that he actually gets paid to do that; a good laugh was had by all.

Then came the highlight of the set for me; Rachel explained that she was going to play Imperfection, and that it was written for Pete. It was a deeply emotional song, made more so by the fact that Pete was leaning up against a bookshelf, allowing Rachel to sing it to him. I will long to hear Rachel do that song again, although it's written for Pete, I have my share of imperfections, and really can appreciate the sentiment. The set included a version of Shine, again representing the wonders of ITA, I never get tired of hearing that one. All together there were four songs, and I truly wanted to hear Rachel's version of "It's a Motherfucker," but the relative closeness of the Children's section probably kept that out of the set-list.

Well, the set ended, and Rachel sat at the Piano and said a few words, and knowing there were about a hundred people there, I stepped up with a couple of photo mouse pads I made, one that I signed to "Rachel, Love, ozzie." It was the same photo I had on the front of my tee shirt, all four of the ITA gang, and also the "Rock The Fuck ON" at the top (quite easily my favorite tag line of all time). I presented her with that one and asked her to sign the other one for me, which she graciously did. I told her how much I enjoyed the set, and all of her involvement with ITA. She remarked that she really liked the mouse pad and that she did recognize me. I told her, yes, quite crazy, but getting better! I was so excited to have the mouse pad signed that I forgot about the three copies of Shine I had. So I stepped to the side to let the other 99 people get through.

I turned and noticed that Pete was in a discussion with someone about a book he was holding, and I waited for him to finish, and as he did, he turned to me and reached for the sharpie I was holding, and he signed the mouse pad. Well I was able to get a few words out, not that they formed a legible sentence, but I hope he got the sentiment; I said "Thanks for keeping going on."  I really don't remember if he said anything back, but I was very happy I even came close to delivering that message, not to mention I had Pete and Rachel's signature on the pad!

It was now time to get on the way to that other thing that Pete is involved with, and the rush was to get there in time for my home town band, Rose Hill Drive. I'd been in the first row for their previous two blistering sets, and didn't want to miss a minute of the closer. So we were heading for the elevator and who should be standing right there, but Eddie Vedder! I had to stop and clandestinely stare for a minute or so, as he is the third biggest Who fan named Eddie. So off we went, me hoping that I wasn't going to miss Eddie play a number with Rachel and her "old man." As it turn out I didn't, but I did miss the opportunity to have my photo taken with Pete when things settled down, but thanks to Carrie from www.longliverock.org, I have two wonderful photos of Pete and myself in very close proximity, which falls under the heading of "a little is alright."