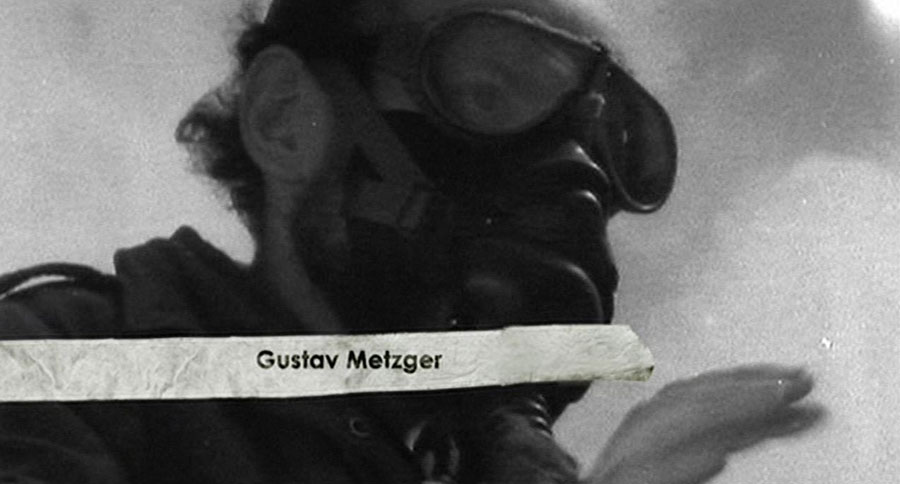 Gustav Metzger, the German artist and political activist best known for developing the concept of Auto Destructive Art, has passed away in London at the age of 90. Metzger created new art in the auto-destruction of objects, such as throwing acid over a nylon sheet, causing it to disintegrate. "The important thing about burning a hole in that sheet," Metzger said, "was that it opened up a new view across the Thames of St Paul's cathedral. Auto-destructive art was never merely destructive. Destroy a canvas and you create shapes." Here is a short documentary that shows this art in action!

Metzger’s work was a huge influence on Pete Townshend, who attended his 'Auto-Destructive Art, Auto-Creative Art: The Struggle For The Machine Arts Of The Future' lecture at Ealing Art College in December 1962. Pete became an advocate of Metzger’s Auto Destructive Art manifesto, and incorporated these ideas into his stage performance by smashing up his guitars and amplifiers in the early days of The Who.

Here is a copy of Gustav Metzger's original Auto Destructive Art manifesto from 1959. 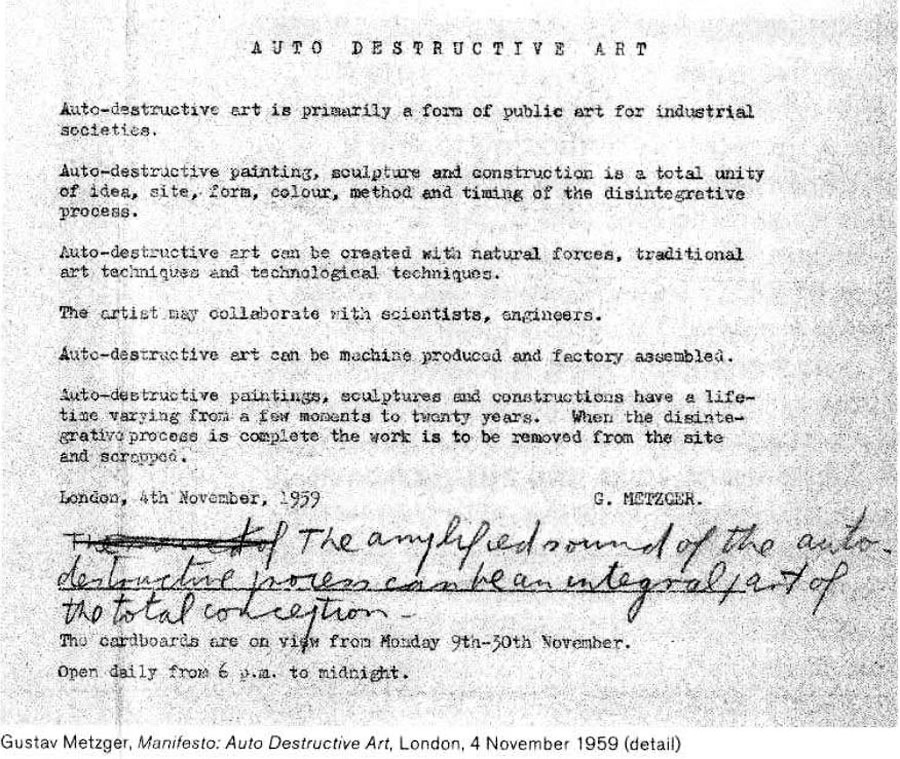 Pete's first use of auto-destruction occured when he smashed his guitar at the Railway Hotel in Harrow, West London in September 1964. This happened by accident, when Pete broke the neck off of his Rickenbacker guitar after banging it on the low damp ceiling above the stage. Pete remembered Metzger's lessons, and proceeded to demolish the rest of his guitar in an act of auto-destruction. The crowd went crazy at the unexpected stage violence. He added this exciting new stage move to future performances, which drew the attention of the London press and helped promote the band. This soon became one of his trademark moves which helped make The Who famous.

“I scrape the howling Rickenbacker guitar up and down my microphone stand, then flip the special switch I recently fitted so the guitar sputters and sprays the front row with bullets of sound. I violently thrust my guitar into the air—and feel a terrible shudder as the sound goes from a roar to a rattling growl; I look up to see my guitar’s broken head as I pull it away from the hole I’ve punched in the low ceiling.  It is at this moment that I make a split-second decision—and in a mad frenzy I thrust the damaged guitar up into the ceiling over and over again. What had been a clean break becomes a splintered mess. I hold the guitar up to the crowd triumphantly. I haven’t smashed it: I’ve sculpted it for them. I throw the shattered guitar carelessly to the ground, pick up my brand-new Rickenbacker twelve-string and continue the show.” [Who I Am autobiography 2012]

Pete has spoken often about Gustav Metzger and using Auto Destructive Art in his performances over the years. Here are a few quotes.

“Gustav Metzger came to my college to do lectures. It was called the 'Destruction in Art Symposium'. Yoko Ono did that thing where she had her clothes cut up, and he slashed his way through a canvas with a samurai sword. The next thing I knew, I’m breaking up guitars at gigs. Then I have the other guys in the band go 'what a load of pompous pretentious drivel!' and I go, 'No, it’s auto-destructive art!' The guitar became, when it was electrified, in my case, an instrument of control, aggression, and latent violence. People say to me  'It’s just stage craft, isn’t it? Just showing off, smashing up your guitar.' To me it was far, far more than that.” [Amazing Journey documentary 2007] 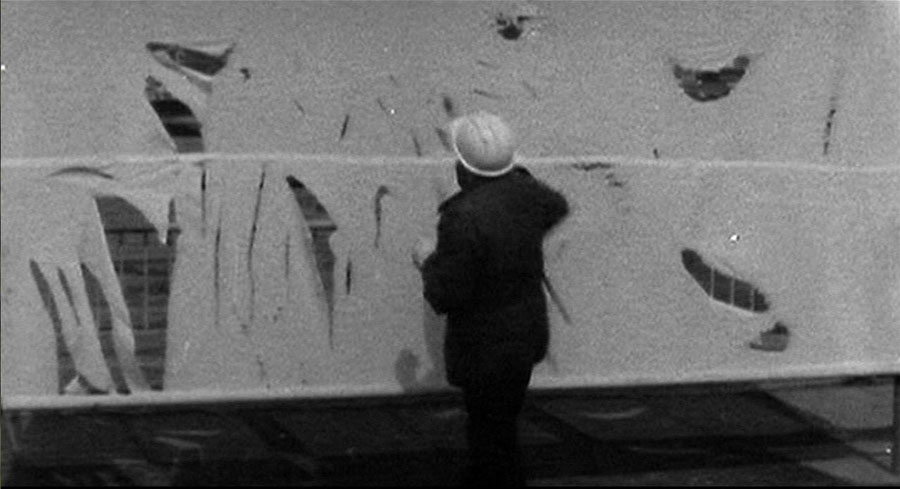 “I suppose having seen so many of the wildest predictions of my art school lecturers come true, I look to art lecturers and radical thinkers in the arts to predict what happens next. A lot of people look back at someone like Yoko Ono for example and fail to understand that in the mid-‘60s she was an agitator, a revolutionary, who used peaceful techniques to shock us into a reaction. Her message has always been about saving the world. Gustav Metzger was the same in the early ‘60s. Smashing a guitar may seem as pointless as singing inside a bag, but the point is that art itself has to find new ways of shaking people out of their stupor. I know a lot of people don’t agree, and I understand why, but they are wrong in my view. Art must shock, agitate and even irritate. It isn’t for putting on the wall. That is decoration, equally valid, but a very different thing.” [Discussions Magazine 2015]

“I fell upon my Rickenbacker with all manner of scraping, banging, bending and wrenching, which resulted in howling acoustic feedback. Encouraged too by the work of Gustav Metzger, the pioneer of auto-destructive art, I secretly planned to completely destroy my guitar if the moment seemed right.” [Who I Am autobiography 2012]

“The guitar is just a tool. Sadly too, as one of the founders of the Symposium for Destruction in Art, Gustav Metzger suggested, I think the guitar is a tool of the bourgeoise production-line of pop art. I will not break another guitar on purpose, but those I did break were broken as part of an artistic manifesto to make my role as an artist harder, and more honest. I feel sorry for the humble luthier sometimes, but there it is. The bombs of the last war probably destroyed many more precious instruments than I can even conceive of.” [Keyboards & Recording Magazine 2006] 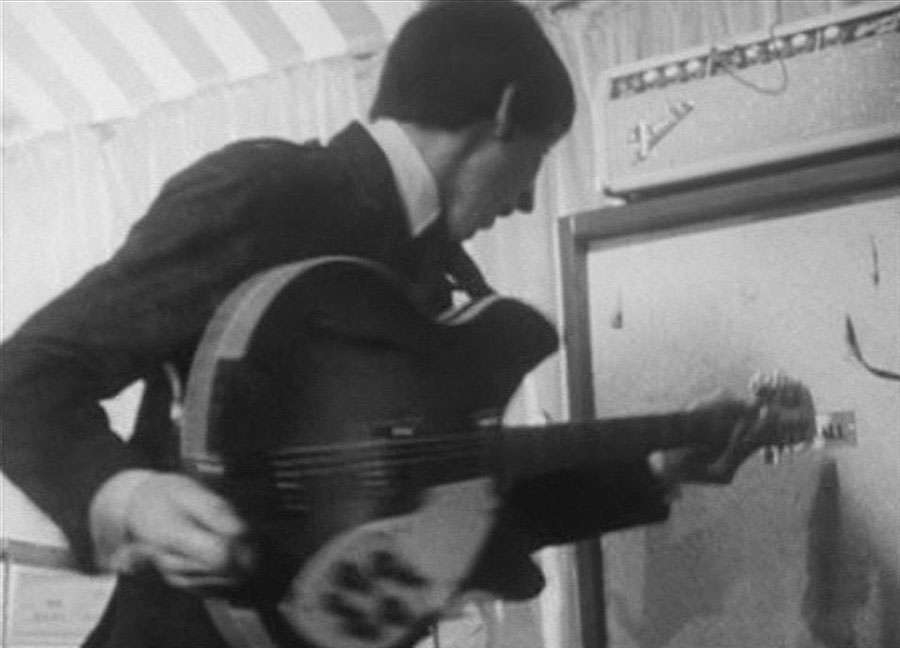 "I had no idea what the first smashing of my guitar would lead to, but I had a good idea where it all came from. ... I was brought up in a period when war still cast shadows, though in my life the weather changed so rapidly it was impossible to know what was in store. War had been a real threat or a fact for three generations of my family.

I wasn’t trying to play beautiful music, I was confronting my audience with the awful, visceral sound of what we all knew was the single absolute of our frail existence—one day an aeroplane would carry the bomb that would destroy us all in a flash. It could happen at any time. The Cuban Crisis less than two years before had proved that. On stage I stood on the tips of my toes, arms outstretched, swooping like a plane. As I raised the stuttering guitar above my head, I felt I was holding up the bloodied standard of endless centuries of mindless war. Explosions. Trenches. Bodies. The eerie screaming of the wind." [Who I Am autobiography 2012]