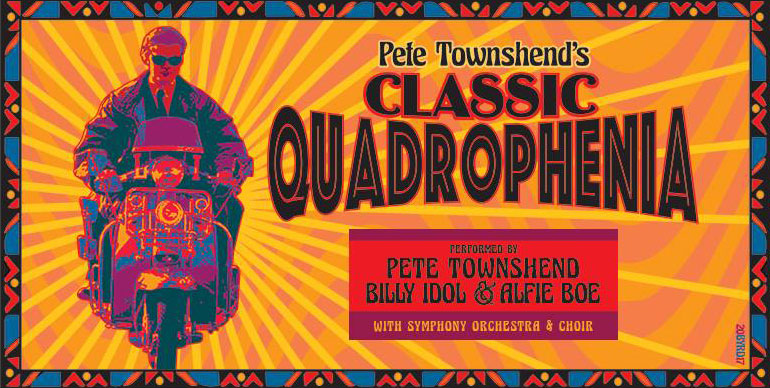 Pete conceptualized an experience unlike any other by presenting a fully orchestrated version of The Who's timeless album Quadrophenia, orchestrated by Rachel Fuller. The London world premiere of Classic Quadrophenia at Royal Albert Hall electrified audiences and will now be replicated at Tanglewood in Lenox, MA on September 2, the Metropolitan Opera in New York, NY on September 9 & 10, and the Greek Theatre in Los Angeles, CA on September 16. The Lenox show will feature the Boston Pops and conductor Keith Lockhart, and the NY and LA performances will be led by conductor Robert Ziegler. The LA show will support Teen Cancer America with a portion of proceeds going to the charity.

"I'm thrilled to be bringing Classic Quadrophenia stateside through the month of September," Townshend said. "Melding the contrasting sounds of Quadrophenia with an orchestra has been a really unique and powerful way to reach a wide audience of classical and pop music lovers alike. I couldn't be more excited to see it continue in the U.S."

Tickets go on sale Wed June 7 for presale, and June 13 to the general public. For more information, please visit Ticketmaster.