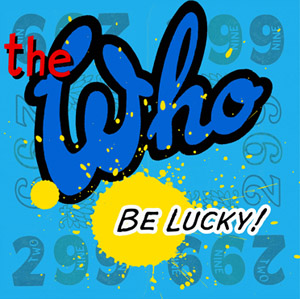 Pete Townshend has written a new single for The Who, called Be Lucky. The song was recorded this summer at British Grove Studios in London and Yellow Fish Studios in Brighton, and will be released on the upcoming The Who Hits 50 2-CD collection, and as a single. All proceeds for the song download will go towards supporting Teen Cancer America.

The band lineup for the new song features most of The Who’s touring band with Pete Townshend on guitar, Roger Daltrey on vocals, along with drums: Zak Starkey, bass: Pino Palladino, keyboards: Mick Talbot, backing vocals: Pete, Roger, Simon Townshend, and Billy Nicholls. It was produced by Dave Eringa, who recently worked with Roger and Wilko Johnson.

Be Lucky premiered on BBC Radio 2 today (Sept 25), along with an interview with Roger Daltrey on the Chris Evans Breakfast Show.

Here is what Roger had to say about the new song.

“We've been in the studio recording for the first time in 7 years, and we had this one recorded. We got a greatest hits thing coming out, and we're going to put it on that, and we're also putting it out as a single. If anyone wants to download it, all the proceeds are going to our American version of Teenage Cancer Trust. I think we’ve made a great record.

Pete always writes original stuff. It's very original, it's very different, but in some ways it's very Who 1973. So, it's got a lot going for it I think. He writes alone, he writes all manner of material, and he presents it to us. Some of them I tell him they're a load of rubbish, but not many. Not that they’re rubbish, it's just that they're not suited for The Who. The ones that work, work, and here's one of them.

We are hopefully going to be doing an album that will be out next summer for our 50th anniversary.”