Premier Guitar has posted an article about the history of the Marshall Amplifier, and how Pete Townshend contributed to the design of the famous Marshall JTM45/100 amp stacks that helped revolutionize the sound of rock and roll back in the 60’s. 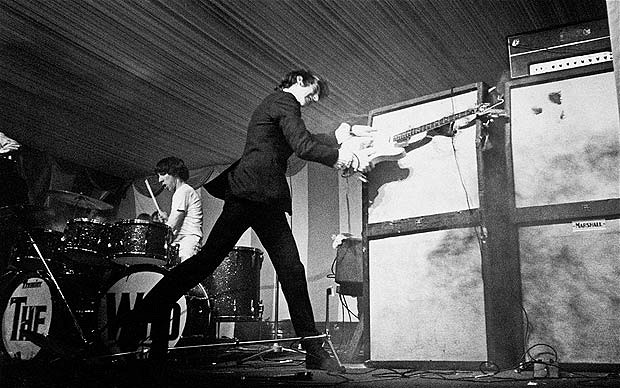 In 1965 Pete Townshend and John Entwistle of the Who were trying any amp that might be heard over Keith Moon’s drums. They briefly used Vox amplifiers, though they were ultimately deemed unsatisfactory.

At the time most amplifier components were rated up to 450 volts of direct current (VDC) and would fail at higher voltages. Said Townshend in an August 1996 interview with (now-defunct) British magazine Guitar, “Fender didn’t go any further with it after the late ’50s. The theory was if you went any further, literally all the other components would melt because they’d been designed for much lower voltages.” Marshall built a 50-watt amplifier known as model 1987 for Townshend, but it wasn’t loud enough. “I went back and said, ‘No, I want it even louder, even bigger,’” he told Guitar.

But the amp’s unique harmonic characteristics caught the guitarist’s ear. “I got very angry, very frustrated,” he remembers. “I kept pushing them. I said, ‘You’d better [expletive] do this—there’s something happening here which is really interesting. You get up to a certain pitch, and something happens between the pickup and the amp. The guitar kind of starts to sound like a symphony orchestra.”

It was almost as if Townshend could peer into the future and see that overdrive would shape the new sound of rock ’n’ roll. “I knew that in distortion there was a music of a much higher harmonic order than anything that I could play,” he said in the aforementioned interview. “So I started that whole trip off.”

On November 1965 the Marshall team completed several of the new 100-watt amplifiers ordered by the Who. The band dispatched their roadie to retrieve their new gear. He proceeded to throw each amplifier into his truck one after the other, just like firewood. “I can’t believe he just did that!” Jim Marshall would later recall thinking.

At the same time that Townshend demanded Marshall build him 100-watt “weapons,”, he also asked for 8x12 speaker cabinets. Jim later shared what Townshend said when he warned him that they’d be nearly impossible to move. “I told Pete, ‘no problem, I’ll make a 4x12 with a straight front and then put an angled one on top.’ He shook his head and said, ‘No, I don’t want that, Jim, I want all eight speakers in one cabinet.’ I told him that it was going to be too heavy and that his roadies were going to complain like mad. His reply was, ‘Never mind them, they get paid,’ and off he went!” Townshend ordered four of the behemoths fitted with Celestion T652 12" speakers, which are similar to 15-watt Celestion Blue Alnico 12" speakers. The bottom half of the cabinet was closed, while the top half was partially opened.

The 8x12 idea didn’t last long for Townshend, though. As Marshall recounted, “A couple of weeks later, he came back and said, ‘you were absolutely right, Jim, they are way too heavy, my roadies are furious!’ He wanted me to just cut the 8x12s in half but that wasn’t possible because of the way they were made—we weren’t using fingerlocked joints in those early days, so the cabs were butt-jointed. So I told him, ‘Look, Pete, I can’t do that because the whole thing will fall apart if I do! Just leave it with me and I’ll get it sorted out.’ So I ended up doing what I wanted to do in the first place—a straight-fronted cab with an angled one sitting on top.” Jim concluded, “the stack was a combination of design ideas from Pete and myself. I don’t mind admitting that we initially built the stack with looks very much in mind, because a wall of them does make a fantastic backdrop on any stage.”