Eagle Rock Entertainment have announced the release of Pete Townshend’s Deep End: Face The Face, the 1986 solo performance from Cannes that was originally broadcast on the German TV program Rockpalast. The show has been restored, and a CD and DVD will hit the stores on September 16. No word yet on if this will be released on blu-ray.

This is exciting news for sure! Fingers crossed this is the first of many more video releases from Pete’s archives!

Here is a bit of history about Pete’s Deep End performances.

To support his 1985 solo concept album ‘White City: A Novel’, Pete Townshend did a short series of concerts with his band Deep End, which was named as a reference to a scene in his movie for White City, where the band played at the deep end of the swimming pool. They first performed a couple of shows at the Brixton Academy in London to help raise money for Pete’s Double O charity on November 1 & 2 1985, selections of which were released on laser disc, VHS, LP and CD as 'Pete Townshend's Deep End Live'. They also performed a short set on December 22, 1985 at the Dominion Theatre in London for the Snow Ball Revue charity show to support the Chiswick Family Rescue Centre.

On January 29, 1986, Pete and the Deep End performed one last show at the MIDEM conference in Cannes. This show was broadcast on the German TV program Rockpalast, and while it has been kicking around as a popular bootleg for years, this will be the first time this show will be officially released.

The Deep End big band boasted a stunning array of musicians who were featured on the White City album, including David Gilmour from Pink Floyd, who wrote the music to the song ‘White City Fighting’ with Pete adding the lyrics, and played guitar on 'Give Blood'. Pete Townshend and David Gilmour also co-wrote ‘All Lovers are Deranged’ and ‘Love on the Air’ which were released on Gilmour’s 1984 solo album ‘About Face’.

Pete discussed the Cannes performance in his 'Who I Am' autobiography.

“I took Deep End to Cannes in January 1986 to perform at the MIDEM conference for musicians and artists, putting myself before almost every leading light in the music industry. The band was the same as in Brixton, feature David Gilmour on guitar, Simon Phillips on drums, Rabbit on keyboards, Peter Hope-Evans on mouth organ, Chucho Merchan (from The Eurythmics) on bass and Jody Linscott on percussion. Kick Horns – a five-piece section – and Billy Nicholls, leading a group of backing singers, enlarged the music to the point I had wanted all those years ago with Roger.

Tony Smith, who managed Phil Collins and Genesis, said it was the best show he’d ever seen. My representatives at Atlantic were excited, and hoped I would take the band on tour. After years as a guitar hero I was now a front man. I looked good, sang well and the music – gathered from a wide range of sources as well as my songs for The Who and my solo albums – was terrific. And for once in my life I knew when to draw the line: I told Atlantic International I would take the band no further.” 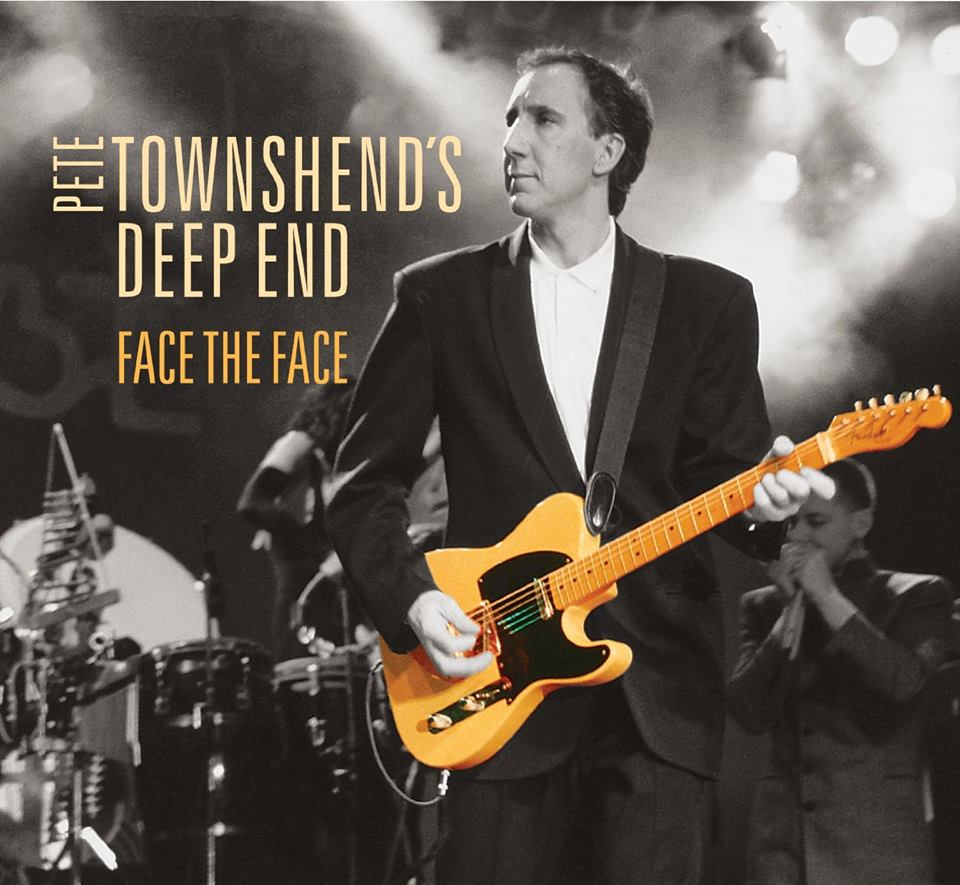 Here is the official press release from Eagle Rock Entertainment:

On 16 September 2016, Eagle Rock Entertainment release the live concert film ‘Face The Face’ by Pete Townshend’s Deep End as a DVD+CD set [Cat No: EAGDV068]. This is the show’s first official release of the show on either DVD or CD format. ‘Face The Face’ features Pink Floyd’s David Gilmour on lead guitar throughout and the set includes ‘Face The Face’, ‘Secondhand Love’, ‘Rough Boys’, ‘Slit Skirts’, ‘Give Blood’, ‘Won’t Get Fooled Again’, ‘Behind Blue Eyes’, ‘Pinball Wizard’ and more.

This show was filmed for the famous German TV series Rockpalast at MIDEM in Cannes on 29th January 1986. Pete Townshend’s Deep End were touring in support of Townshend’s solo concept album “White City: A Novel”. Several of the musicians that appeared on the album were featured in the line-up of the Deep End including Pink Floyd’s David Gilmour on lead guitar. The set list has tracks from the “White City” album, other Pete Townshend solo tracks, Who classics, David Gilmour’s song “Blue Light” and a couple of surprises.

‘Face The Face’ is a fascinating and compelling release. Pete Townshend and the band deliver an outstanding performance that showcases him as a solo artist as distinct from his work with The Who.