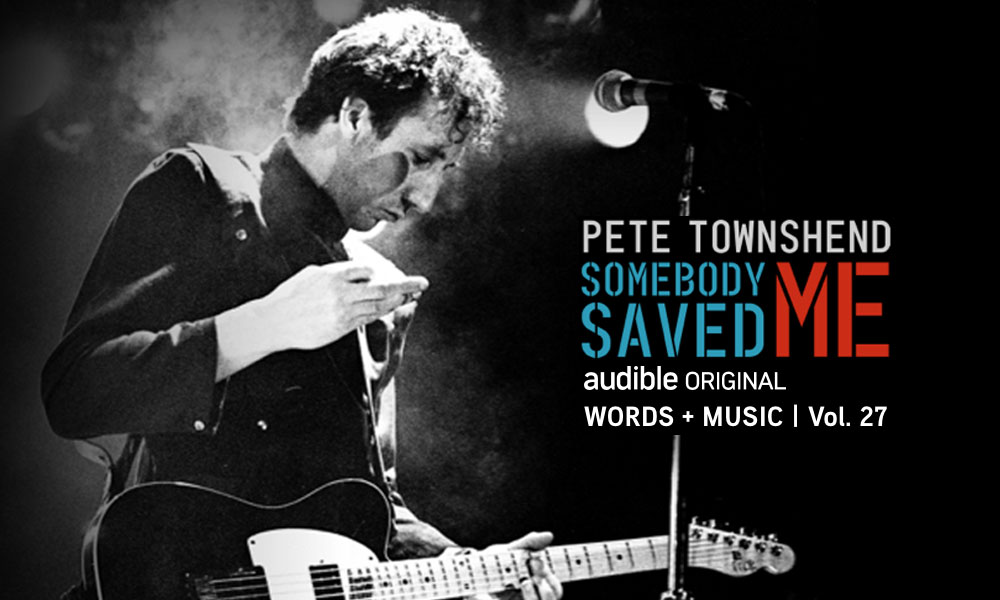 Audible Original has just released Pete Townshend: Somebody Saved Me, a fantastic new audio stream that is the latest edition (Vol. 27) to their Words + Music series. The program began streaming May 6, and is available for free in the US on the Audible website.

The two hour program covers the period between the tragic deaths of Keith Moon and John Entwistle, focusing primarily on the late 70’s and early 80’s, which Pete Townshend refers to as his “middle ages”. It is a terrific follow-up to his 2012 autobiography Who I Am, going a bit more in-depth on this time frame than he was able to do in his book.

Pete mixes storytelling with updated studio recordings of his songs to help supplement his narration. The format works really well, and is reminiscent of his appearance at VH1’s Storytellers show in 2000, which was produced by Bill Flanagan, who also co-produced and interviewed Pete for Somebody Saved Me.

In an interview with Billboard, Pete said, “I loved this format, because it enabled me to approach the songs and the music that I was writing in that five-year period [through] what was going on in the music. I really, really enjoyed it and I felt safe with Bill and Audible talking about a kind of dangerous period for me — where I was very productive but not particularly successful, where everything I was doing was lucrative, but the pressures were fantastic.”

The songs included in Somebody Saved Me all come from the albums Empty Glass (1980), Face Dances (1981), All the Best Cowboys Have Chinese Eyes (1982), and It’s Hard (1982). Most of the songs were recently recorded in the studio with bassist Guy Pratt and drummer Ged Lynch. Pete’s instrumentation and fresh new arrangements sound amazing, and his singing is absolutely exquisite. The recordings include A Little Is Enough, Rough Boys, Somebody Saved Me, Don’t Let Go The Coat, Eminence Front (with the interesting keyboard intro that was played at the TCT RAH show earlier this year), and You Better You Bet. There are also short segments of songs that Pete played during the interview, such as Let My Love Open The Door, where Pete demonstrates his classic keyboard parts using the original organ that he wrote the song on. He also performed excerpts of I Am An Animal, Somebody Saved Me, and Sea Refuses No River on guitar, and Slit Skirts on piano.

Proceeds from the program will go directly to Teen Cancer America. Pete told the LA Times, “We do [benefit] shows every year at the Royal Albert Hall. So I thought, fuck it, I could get Audible to give the money directly to Teen Cancer America, which during the lockdown had suffered hugely through lack of funds. I knew it would be tough to revisit such a sensitive time, but it also turned out to be huge fun. I’ll be 77 at my next birthday, and I’m probably at the end of heart-searching in my career. I’m not going to be able to change much about the way that I feel about what’s happened. I’m probably at the end of my crazy days. So I decided to wade through it.”

A lot of ground is covered in this program, with Pete digging deep into many aspects of his life during this period. He discusses the ups and downs with The Who, the activity of his solo career and various business projects, and what was going on in his personal life during this tumultuous time. It was a really productive time, but also a very fragile and destructive period for him to survive.

Pete has done a wonderful job of telling us his story, and the new music to go with his narration is awesome! It's essential listening for all of his fans, so be sure to check it out at Audible.com!

Pete closes the program with this touching reflection about his work with The Who, who are currently touring the US!

“My work with The Who has been like blood and guts — it’s been the stuff of adventure, of excitement. You can't diminish this. It's like being a war hero without having to go to war. We are celebrated for the bad things that we do as much as for the good things we do. We are celebrated because we’ve managed to survive. But there's more to it than that. It is that when Roger and I go on stage together, we are pushing 80, we are both past 75, there will be people looking and thinking, these guys are managing to find something to do that looks like fun, it looks like celebration, it looks like life at its best. It looks like they’re living their best life. And they may only have five more years on the planet! Is this not a celebration of what being alive is in the West?

When you see me on the stage, you'll see somebody who has at last made peace with his audience, with his work, with his past, and with his history. And with life — with everyday life. It's the sense of peace and contentment and the lack of expectation. The spiritual journey as we call it, is literally a waiting game. It’s waiting to get to the point where we’ve got a clear enough vision of who we are, where we are, what the world is, in order to wake up and just accept that we kind of knew it all along. Life is good, ultimately.”