Pete Townshend is featured in an excellent new documentary on the history of the Marshall amplifier that aired last night on BBC4. The film tells the story of the "Father of Loud" Jim Marshall, who started out in a shop in West London near where Pete grew up, and went on to pioneer the legendary sound and technology that helped launch rock and roll into the stratosphere. Pete has a lot of thoughtful comments about his friend, and articulates the importance of the role Marshall played in the foundation and rise of British rock in the early 60's and beyond. 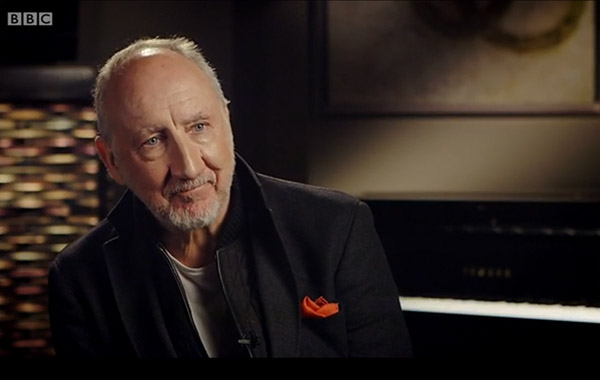 Marshall is a symbol of the rise of British Rock. That is what it was all about. Marshall stacks.

The video can be viewed online for 4 weeks on the BBC iPlayer.

One iconic black box has probably more than anything else come to define the sound of rock - the Marshall amplifier. It has been, quite literally, behind some of the greatest names in modern music. It all started in 1962 when drum shop owner Jim Marshall discovered the distinctive growl that gave the electric guitar an exciting new voice. Music got a whole lot louder as young musicians like Clapton, Townshend and Hendrix adopted the revolutionary 'Marshall Sound'. The electric guitar now spoke for a new generation and the genre of rock was born. Soon Marshall stacks and walls were an essential backdrop of rock 'n' roll. The excesses of rock machismo were gloriously lampooned in the 1984 movie This is Spinal Tap. In an extrodinary piece of reverse irony, it was this comic exposure that rescued the company from financial meltdown. With contributions from rock legends like Pete Townshend, Lemmy and Slash, plus an interview with the 'Father of Loud' Jim Marshall, this documentary cruises down the rock ages with all the dials set to 'eleven'.