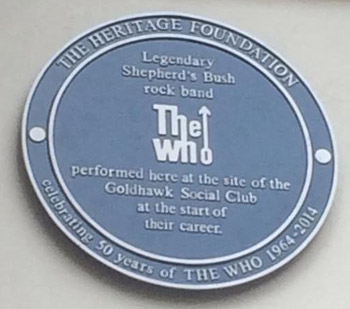 A special Blue Plaque in honour of The Who was unveiled by the Heritage Foundation today at the legendary Shepherd's Bush Club on Goldhawk Road in Shepherd's Bush London. At weekends on club nights in the '60s it was known as the Goldhawk Social Club. Pete Townshend, Roger Daltrey and John Entwistle started out as The Detours in 1962, and performed regulary at the club starting with their first known performance on June 7th 1963. The Who's last performance at the Goldhawk Club was on December 3rd, 1965.

The event was organised by longtime admirers and friends of the band, Melissa and Gary Hurley, in conjunction with David Graham of the Heritage Foundation and also David Stark of SongLink International. Melissa Hurley commented, "After the incredibly well-attended unveiling of the Blue Plaque for Keith Moon at the site of the old Marquee Club in Wardour Street in 2009, we decided to celebrate The Who's 50th anniversary by honouring the band with a plaque in their home manor of Shepherd's Bush in West London."

Following the unveiling ceremony, the Heritage Foundation hosted a luncheon at the Regent's Park Marriott Hotel in London, where those in attendance were treated to a performance by top tribute band Who's Next.

Many thanks to everyone who worked on this, and a big congratulations to The Who for receiving this great honour!

Irish Jack Lyons, who was a regular member of the Goldhawk Social Club in the very beginning, asked us to post the following message to Gary and Melissa, and to everyone involved in making this event happen.

Be sure to read the interview we did last week with Irish Jack about the early days of the Goldhawk Club, and also his story The Who's Last Night at the Goldhawk.