Pete Townshend and Roger Daltrey held a press conference at Wembley Stadium on March 13 to plug The Who's upcoming concert which will take place there on July 6. They conducted a series of interviews with major UK newspapers, TV and radio stations, which have been trickling out over the past week.

Pete posted a blog about his press day, and also an Instagram post, where he mentioned he was recovering from a cataract operation, hence the presence of new shades during the interviews.

This concert will be the third time that Pete has played at Wembley Stadium with The Who. The first time was August 18, 1979, when The Who performed a gig with The Strangers, AC/DC, and Nils Lofgren. The second was Live Aid on July 13, 1985. Roger also played there at the Freddie Mercury Tribute Concert for Aids Awareness on April 20, 1992. This will be the first time they will play at the new stadium, which opened in 2007 on the site of the original stadium that was demolished.

The Wembley concert is currently the only UK show on the schedule for this year, and the only one they will perform this summer, as Pete and Roger wanted time off between the US legs of the Moving On tour. There is the possibility of more UK shows later in the year. 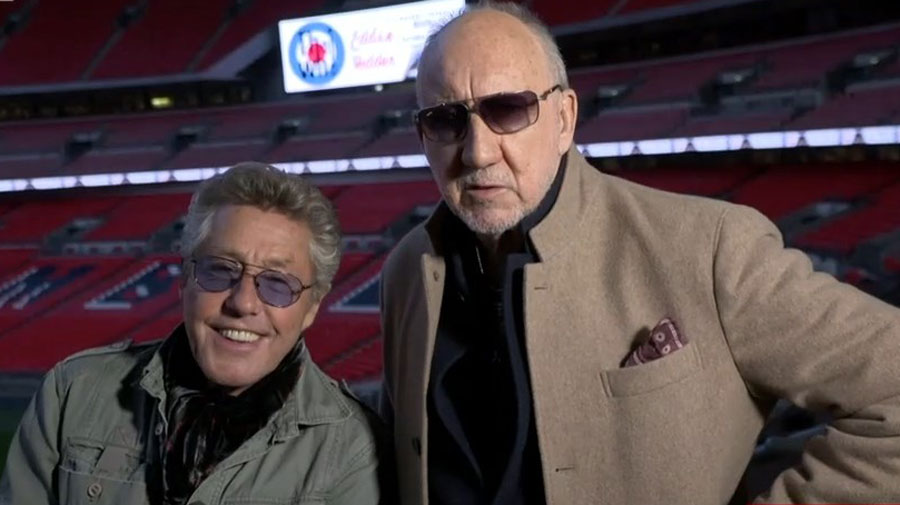 Pete and Roger answered questions on a wide range of topics, including work on the new album, the Moving On tour, and their relationship.

Here are a few excerpts from the various interviews.

On the new Who album.

Pete: “I started writing songs for this to throw out to Roger around February of last year, and I did most of the work in the summer, a beautiful summer in England last year. I had a studio in a barn, which I went to every day. So we started with the recordings, taking some of the stuff that I had done myself, with a producer and a proper studio with other musicians, and with Pino Palladino and Zak Starkey on drums and bass. I added guitar in various places, and Roger has been doing vocals. So we are about two-thirds of the way through the process, and I think we are going to have a really great record. I think I’ve got some good songs that are current. I’ve got songs about homelessness, about the fishing industry, about the way men might have to change in the future, you know, of the Me Too thing. All kinds of current stuff. And possibly there’s a bit of room too for a few guests, maybe a female vocalist here, or a rapper here, or whatever. We shall see.”

Pete: “I’m always a bit eclectic in the way that I approach music. I find it difficult to get into a particular groove or a particular style and stay with it. I enjoy being in the studio and having fun noodling around and doing different things. So there’s a lot of different things going on. But it’s me. I’m writing the songs so it will remind people of other songs that I have written or have a Who slant to it. I’m sure Roger will Whoify the vocals in the way that he always does. What I’m pleased about was I was allowed to give it time. I took a year out from touring, and gave myself that whole year to think about, to consider, to write lyrics, to dump stuff, to take chances, and to look around and learn, and study, and just see what was actually going on. I know all the obvious stuff, of people committing suicide, I know all about the drug and alcohol, women’s violence, the cancer work that we do. I know all the leading edge stuff. What I wanted to find out about and what I wanted to get a feeling of was what we could say, as two guys in our seventies who have this incredible instrument in The Who, that might appeal to people that might want to listen to the songs, not the messages. It’s not songs with messages, but they need to be songs that are relevant. They need to matter. So that was my mission. I had a really good time doing it, and I’m enjoying the studio work now. I’m looking forward to finishing it and seeing what the public think of it. They may hate it, who knows.”

Pete: “Pertinent subjects for me at the moment are homelessness, mental illness, domestic violence — tremendously troubling — the slow, tortuous evolution of women’s rights, and the rights of children to be free of abuse of all kinds. But also lighter things, the idea that at 75 years old you can look back and remember a single love affair, a single one-night stand, you can remember it in every detail, and write a song about it. Or there’s the plight of fishermen in Cornwall or in the north-east, where they want to get out of the European Union, but then what we know they’ll do is they’ll probably overfish again.”

Pete: “We went through so many different phases so now really the challenge is just writing music which is good music which suits Roger and I.”

Roger: “I’m a real, real hard taskmaster when it comes to what I sing and whether, whether it’s a good song or not. And I’ll tell you, he’s still got it.” 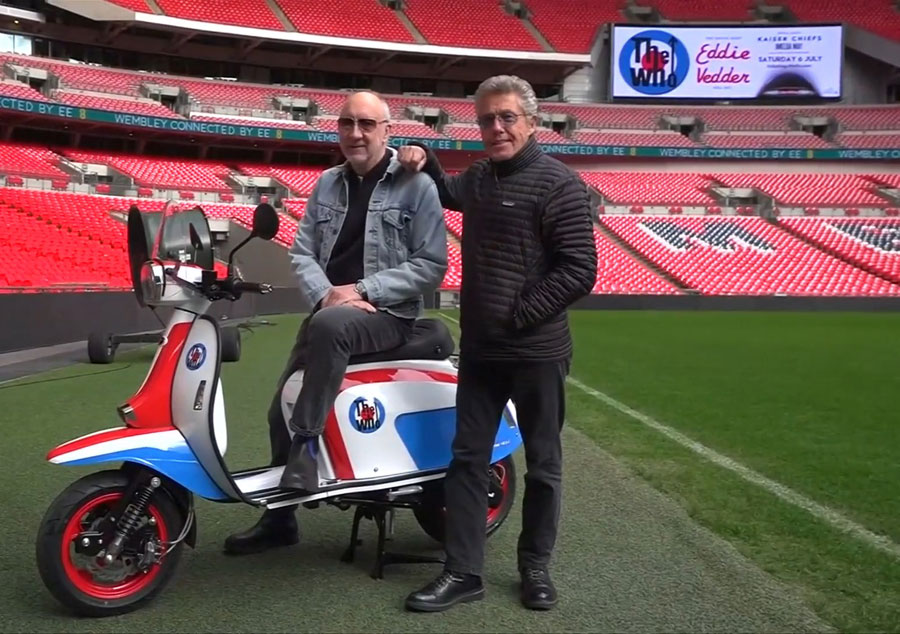 On the Moving On tour.

Roger: “The Who isn’t the Who it once was, it’s Pete and I, so we can do whatever the f*** we like. Expect nothing and you won’t be disappointed. When we were asked to do this tour, I said I’d really like to, but I didn’t know what we’d do – we’ve been constantly touring. The Who toured Quadrophenia, we’ve toured the hits… it feels like we’ve got to do something a bit different. Last year, I did a tour of Tommy with an orchestra. I threw it out there to Pete and said maybe we should do what we do but with an orchestra. Some of it without, some maybe with a string quartet. It gives us incredible scope to make our music bigger. It won’t be smaller or softer, it’ll be full-throttle. Our attitude to how we play won’t change.”

Pete: "I think our relationship as friends and as co-workers, it's not an intimate one. When we travel on the road we don't spend a lot of time together. I think what makes it interesting for us both is that this feels very much like work. I wanted to be an artist, but what I found by writing songs for The Who was there could be no better job. I had an audience, I had a band to write for and a great voice in Roger… And when we get together you know there's also that thing about carrying the history that we do. It kind of imposes and interposes and interpolates a bit of magic. Nothing to do with us."

Roger: "I'm not the writer of the songs, Pete is, but there's something about climbing into his music for me as the portal that communicates it with people. I never feel more alive than when I'm doing that - it's absolute freedom. The chemistry between us musically when we're on stage, it's telepathic. There's something in the air that is intangible. You can't put a finger on it, but I know it's there between Pete and I. It can turn on a dime without even looking at each other. It just happens. It's magical."

Pete: “My journey with Roger has gone from what I would call an uncomfortable and uneasy place to the most wonderful of places . . .  it’s just got better and better. There have been difficulties but nothing that would cause either of us to lose any sleep. When we began, I didn’t even really want to be in a band. Roger’s ambition, his drive, his commitment, his self-discipline, his need to make The Who his job was what kept me hanging on. He had to bully, cajole and force me to a point where I was writing music. I was creative. I’d done art school. So I put up with the band in order to write the songs. We’ve got to this point through fallow periods, great successes and some really quite considerable failures. We’ve had albums that didn’t do well and shows that didn’t sell out. Now, however, by giving each other plenty of space, we’ve developed a sense of respect for each other, which is far, far, far greater than we had when we began. So I’m really happy with our relationship. We really are friends and we really love each other.”

Roger: “We love each other and we always did. Even though we did this wrestling in public, God help anyone who came between us.”