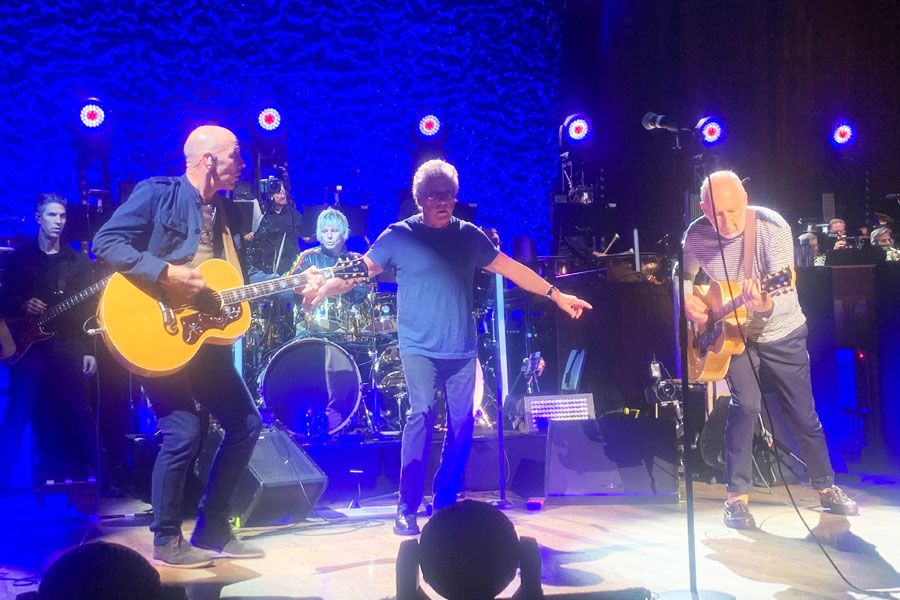 It was a warm night at the Blossom Music Center outdoor arena in Cuyahoga Falls, south of Cleveland but the heat didn't affect the performers, well maybe they perspired more than usual but they were absolutely brilliant.

The setlist was similiar to recent shows. Orchestra set 1 was consistent, although Join Together was gone; the band 5 song set had a swap of YBYB and the Seeker. At least they kept Miles. Orchestra set 2 was the same skinnied down set, with Drowned and Punk and the Godfather eliminated again.

Roger was the strongest that I have heard him in the fall tour. He performed his Tommy tour in this arena in July 2018 and he likes the sound there. He was energetic, powerful and sang with enthusiasm and in tune all night. His Love Reign was wonderful. As was Loren's intro to it.

Pete seemed to be enjoying himself also, still messing up the order of the I'm One verses but now Simon joins him when he sings the second verse third, so at least he is getting his duet in. This seems to be a mental block for Pete but as he wrote it, he can change it.

This orchestra was perfect. Not too loud. In sync with the band - sometimes they get ahead of the band and it sounds disjointed.

Behind Blue Eyes with Katie on violin and Audrey on cello is so beautiful and rich. Imagine a Man has become one of my favorites - again the orchestra adds so much to Roger's poignant interpretation of this song. It is a mini Love Reign.

Neither Pete nor Roger are telling many stories on this tour. There is an occasional comment but the show keeps moving, perhaps it is the orchestra influence.

This is a nice outdoor venue, but you walk for miles and miles with parking seemingly in another county.

Peter Wolf was the support. I couldn't help but think of a rock Howard Stern the entire time that he was on stage. Quite an entertainer.

I’ve seen the Who as a unit three times, and their show at Blossom was easily the best performance I’ve seen by the band or in any other incarnation of its members.

Essentially, Pete cares again. Roger has always put everything into every performance he’s ever given. No one works harder than Roger. The story about his years of performing with an undetected broken back in his amazing new memoir prove that point instantly.

Roger has always been a working class guy who puts a hard day’s work into everything that he does. His idea of a good time seems to be taking an ax and clearing out a forest. His biceps right now make it look like he could beat John Henry in a steel driving hammer competition the moment you wake him from the beginning of a night’s sleep after a long busy day.

There were moments where you could literally see the veins bulging from his neck during the show as he willed his voice to the heights of his prime. “Imagine a Man” and “Love Reign O’er Me,” are nearly impossible songs to sing, and he sounded fantastic doing them. If there is anybody else alive who can perform them as well as he did on Tuesday, I’d love to see them try.

Pete was the difference maker for me during this show though. I’d been a bit worried at first when I saw clips of him in a red shawl early in the tour as if he was ready to be admitted to an old age home and talk about begonias or something, but the Pete Townshend I saw September 10th, at the Blossom Amphitheater between Akron and Cleveland, Ohio was the same guy who kicked Abbie Hoffman off the stage at Woodstock. He was the same guy who nearly killed a fireman when he came on stage to tell him that the building was on fire. He was the same guy who barked something to the effect of “There’s a guitar up here if any of you little gits want to try and take it off of me!”
He was actually better than that.

The Who at their best live were when they most worked together. In their original incarnation, all four were trying to outdo each other and the brilliance of Keith Moon’s ears somehow made it all work when he had his usual good night.

Roger’s book details his issues with “Live at Leeds.” The best clips of the who usually showed Pete staring right at Keith in order to best “join together,” and his focus and concentration were unbelievable during this show.

During the first few songs from “Tommy” you could tell that the syncing with the orchestra wasn’t exactly right, but by the time they got to “Sparks” you could see that Pete was in control of every single swell of power and volume that his guitar emitted.

He was listening to every note and constantly adjusting his dials for maximum efficiency. He still brought out the windmills and the flash, but most of the time you could literally see him straining every muscle of his body in order to listen and make every note played on stage as effective as possible.

Entwistle’s past virtuosity left Pete a lot of room to just provide volume and rhythm to the band’s live performances, but the big screens showed that he is literally playing the best guitar of his life.

He was tapping, using pick scrapes, and handling his vibrato bar like a master. He seemed like he was playing the parts of four guitarists at times in the same way Greil Marcus said of Keith in his obituary.

Roger and his acoustic pairing during “Won’t Get Fooled Again” showed that nobody ever has had the ability to drive a band rhythmically like Pete does right now.

Early in his career there was talk of Pete fronting the band, but he just didn’t have the bravado or force vocally to do that until perhaps the release of the song “Rough Boys,” which was the first sign that he was saving his best material for himself.

He sang, “I’m One” as if his life depended on it. Everything he sang was filled with the passion and hunger of that snotty, arrogant kid who wanted to be louder, more artistic and reinvent the entire world in his own image from the start.

I have no idea how Pete and Roger can still produce that much sweat onstage at their age. Zak Starkey was sweating as if he had just run ten marathons, but then keeping up with precedent of Keith Moon at his best is nearly impossible.

I used to nearly pass out air drumming to just “The Ox” as a kid. Zak’s drumming was impeccable and he lent some of his own flavor to “I Can See for Miles,” “Eminence Front,” and “Substitute,” but during the “Quadrophenia” section of the show you could tell that he was in sync and laying down every single beat almost exactly as it was when Keith first laid it down flawlessly in 1973.

I saw the band in Los Angeles right after John Entwistle died, and there was a lot of hilarious interplay between Pete and Roger that night. If Pino Palladino played much, it was hard to remember because it seemed as if Pete had put a governor on his amplifier.

Other than the usual expected highlights, I really enjoyed the interplay between Pete and his brother Simon as the latter played the intricate lead parts during the “Rock.”

The person I sat next to is very familiar with the Cleveland Orchestra and the venue, and he had some issues with the digital format balancing out the sound, but I don’t have the sophisticated ears to be that picky.
I wasn’t a huge fan of Pete’s recent orchestral work on his latest Quadrophenia project, but I heard sounds of the show that made having an orchestra worth every penny it took to bring them onstage.

My biggest problem with the venue was the fact that I had to pay $5.50 for a bottle of Diet Pepsi, which seems a bit criminal to me.

Just a fabulous evening, but the songs that Roger and Pete did together alone with acoustic guitars will be my lasting memory. They are still here. They are not old yet. They still care.
Pete largely ignored or dismissed Keith in his memoir, and I’ve been upset that he’s carped about his drumming lately, but after he introduced Zak he said something to the effect of “Let’s all take a moment to remember that brilliant shithead Keith Moon.”

Pete just probably mourns every day Keith isn’t still alive. Keith’s death quelled them as a live force for years, but there still isn’t a band around that can put out the energy, volume, ambition, passion of what I just saw.

It was a life or death thing for both Pete and Roger every second they were on stage and that means that no other band should try to follow them. They can do anything, anywhere, and anyhow in any way they choose.