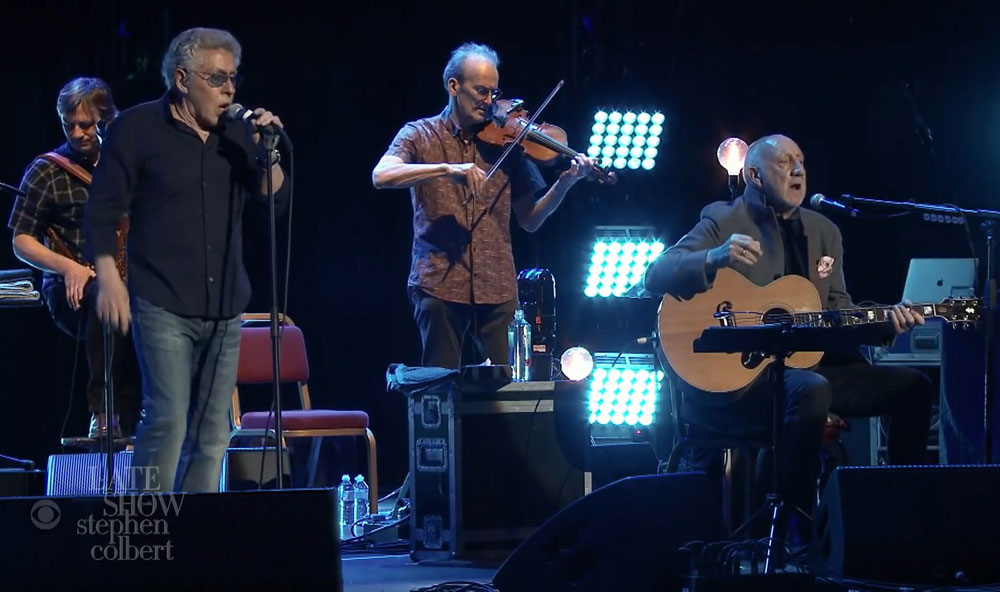 The Who were featured on ‘The Late Show with Stephen Colbert’ last Friday April 15. The show closed with a video of their beautiful acoustic rendition of ‘Behind Blue Eyes’ that was recorded at the Royal Albert Hall in London on March 25. The concert was a special charity show to benefit Teenage Cancer Trust in the UK.

The broadcast was a promotional effort to help kick off the Spring leg of ‘The Who Hits Back’ tour, which opens in Hollywood, Florida on April 22. The North American tour picks up where their 2019 ‘Moving On’ tour left off, with Pete and Roger backed up with their usual awesome line-up of musicans accompanied by an orchestra.

This was the first time Pete Townshend or The Who have appeared on Colbert’s popular late night program, which is broadcast from the Ed Sullivan Theatre in New York City. The Who are busy rehearsing for the tour in Florida, so they were unable to turn up in person for a live studio performance. Hopefully, they will be able to appear on Jimmy Fallon's Tonight Show when the tour goes through New York in late May.

For more information, please check out our articles about The Who's Royal Albert Hall show and 2022 North American tour!

Here are the Spring dates of 'The Who Hits Back' tour.