Pete Townshend's solo catalogue has been released this week in digital formats, and is now available for download and streaming from various digital distributors, including  iTunes and Spotify. Later in the year, the albums will be remastered and released on CD. The reissue programme is still in the planning stages, so what bonus material will be included and what other formats these will be available in are still to be decided. 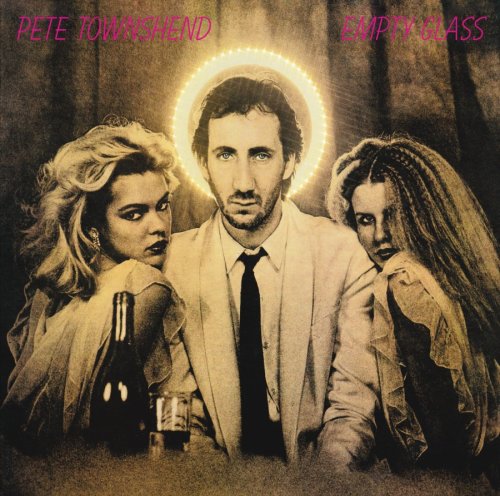 The following is the official press release.

23rd February sees the digital release of 11 of Pete Townshend’s solo albums digitally as part of a new deal with UMC / Universal Music.

An extensive reissue programme for Townshend’s solo material that will see the catalogue remastered and reworked is planned to start later this year and will run into 2016.

The 11 digital album releases cover Who Came First, his collaboration with The Faces’ Ronnie Lane Rough Mix, his musical version of Ted Hughes’s The Iron Man, his collections of demos Scoop, Another Scoop and Scoop 3 as well as the albums Empty Glass, All The Best Cowboys Have Chinese Eyes, White City, Psychoderelict and the live album Deep End Live featuring David Gilmour.

This 1972 release was the first release by Pete Townshend outside of The Who. The album is a collection of music dedicated to Meher Baba, Townshend’s spiritual master. The resultant album exposes Townshend’s spiritual enlightenment and sees him perform with fellow Baba followers, including Ronnie Lane and Billy Nicholls.

The album includes Townshend’s versions of Who Classics ‘Let’s See Action’ and the sublime opener ‘Pure and Easy’ as well as cover versions of songs, which were Baba favourites.

For Pete Townshend’s second album away from The Who he teamed up with ex Small Faces / Faces bassist Ronnie Lane for ‘Rough Mix’. A veritable A-list of musician friends, including Eric Clapton, John Entwistle and Charlie Watts, were drafted in to provide backup. The album featured new material written by Townshend and Lane.

The album features the sublime ‘Heart To Hang Onto’ which Townshend performed at the Ronnie Lane Tribute Concert at the Royal Albert Hall in 2004.

Considered by Pete Townshend to be his first ‘real’ solo album ‘Empty Glass’ was also to become his most commercially successful. Coming after Keith Moon’s death the album sees Townshend at his most emotional and rawest as he publicly acknowledges his own addictions and exorcises his demons.

The album spawned three singles including the top ten US smash ‘Let My Love Open The Door’ as well as ‘Rough Boys’, ‘Empty Glass’ and ‘A Little Is Enough’.

All The Best Cowboys Have Chinese Eyes

Released in 1982 the album contains the singles ‘Face Dances pt 2’ and ‘Uniforms (Corps D’Espirit)’ and a companion promotional video featuring seven of the tracks was made for the fledgling MTV Network.

Describing the unusual title Townshend said ‘it’s about the fact that you can't hide what you're really like. I just had this image of the average American hero – somebody like a Clint Eastwood or a John Wayne who was basically capable of anything – you know, any kind of murderous act or whatever to get what was required – to get, let's say, his people to safety. And yet, to those people he's saving, he's a great hero, a knight in shining armor – forget the fact that he cut off fifty people's heads to get them home safely. If you're really a good person, you can't hide it by acting bad; and if you're a bad person, you can't hide it by acting good.

For ‘White City’ Pete Townshend returned to the concept based song cycle that had utilised in The Who. The album, and accompanying long form video, told the story of life on a working class council estate in Townshend’s old West London stomping ground. The songs deal with lost love, racial tension and broken dreams.

The album, released in 1985, peaked at number 26 in the Billboard chart and saw similar success for the singles ‘Give Blood’ and ‘Face The Face’. The album also saw contributions from Pink Floyd guitarist David Gilmour, who also performed with ‘Deep End’, the band formed by Townshend early in 1985.

The Iron Man: The Musical

This 1989 album was based on the story ‘The Iron Man’ by Ted Hughes, who Pete Townshend met whilst working at the publishing house Faber and Faber. The album features contributions from music luminaries Nina Simone and John Lee Hooker (who performs as the eponymous ‘Iron Man’) and formed the basis of a theatre production, which would be staged, at the Young Vic Theatre in London.

The album also saw The Who reunited on record for the first time in seven years on the tracks ‘Dig’ and ‘Fire’, a reworking of the Arthur Brown 60s classic.

Probably the most complex of the Townshend solo albums, 1993’s ‘Psychoderelict’ is a multi-layered concept album featuring dialogue harking back to his ‘Lifehouse’ project. The resulting tour featured actors performing alongside the live band.

The critically acclaimed Scoop series of albums gives the listener a privileged peek behind the scenes of one of popular music’s greatest songwriters. The albums showcase Pete Townshend’s career spanning demos for both The Who and his solo recordings.

The first release, ‘Scoop’, was released in 1983 and includes Townshend’s versions of Who classics such as ‘So Sad About Us’, ‘Squeeze Box’, ‘Circles’, ‘Behind Blue Eyes’ and ‘Love Reign O’er Me’.

‘Another Scoop’ followed four years later and continued to provide valued access to the Pete Townshend’s vaults. Among the tracks included on this volume are ‘Pinball Wizard’, ‘Substitute’, ‘You Better You Bet’ and ‘Pictures of Lily’.

‘Scoop 3’ surfaced in 2001 and included Townshend’s initial versions of the classics ‘The Real Me’, ‘ Sea and Sand’ and ‘Eminence Front’.

In February 1985 Pete Townshend performed two charity shows at London’s Brixton Academy. The sold out shows benefitted the ‘Double O’ charity, which was formed by The Who in the 1970s. The band, performing under the banner ‘Deep End’, featured Pink Floyd guitarist David Gilmour and saw the band performing an eclectic range of songs, encapsulating not only Townshend’s compositions but classics such as ‘I Put A Spell On You’ and ‘Barefooting’ as well as more contemporary songs like The Beat’s ‘Save It For Later’. Townshend classics such as ‘Pinball Wizard’ and ‘Behind Blue Eyes’ also make an appearance.